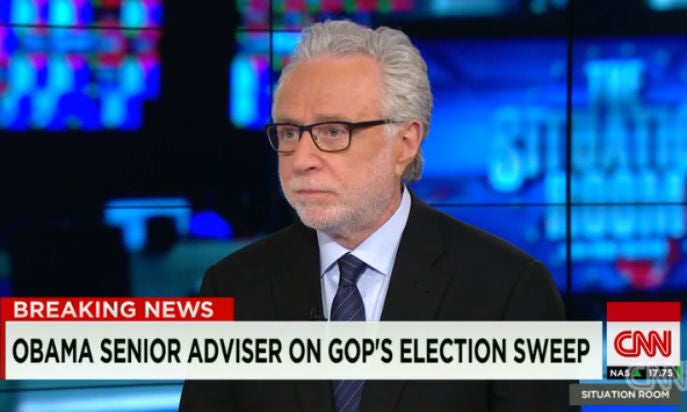 CNN’s Wolf Blitzer may be in a sticky staff situation with the majority of grievances pointing at his “The Situation Room” executive producer, Jay Shaylor.

Blitzer’s cable news show has seen a “mass exodus” of longtime employees over alleged overstrained relationships with the EP, according to the Daily Caller.

A spokesperson for CNN has declined to comment to TheWrap.

An individual with knowledge of the situation told TheWrap that Shaylor “has a little ego but he came from a network [where] they all do. He does a good job for the company.”

Replacing “beloved” EP Patricia DiCarlo a year ago, Shaylor has been pinned with “ego” and “insecurity” issues ultimately resulting in the loss of eight longtime staffers.

Isolating Blitzer from employees, going out of pocket for hours during high-pressure work days, condescending to his team and even making fun of female Congressional fashion are on Shaylor’s list of alleged offenses, claimed the report.

“As far as missing for long stretches,” the individual also says “yes and no,” because CNN president Jeff Zucker “is a micromanager so Shaylor may be tending to all those needs but he does have a desk in the newsroom pod that he’s at 75 percent of the time.”

The dirty laundry in the Caller piece is a case of disgruntled employees going to town, the individual adds.

Here are 7 allegations from the Caller’s call-out of Shaylor:

No access to Wolf:
Shaylor allegedly scrapped a daily show-wide meeting to “drive a wedge” between Blitzer and staff. He is said to huddle exclusively with Blitzer and senior broadcast producer David Gelles in Wolf’s office, while everyone else has been relocated to a conference room. “It’s maddening,” according to the Caller report.

Disappearing act:
“He’s nowhere to be found,” one worker said, leaving Gelles with the lion’s share of responsibilities as Shaylor cites vague meetings to explain his absence. TheWrap is told by an individual that it’s half true, because Shaylor is often accommodating “micromanaging” Zucker.

Name dropper:
The report claims Shaylor is anxious to seem connected to network brass, dropping Zucker’s name often so he “gives off the impression that he’s tight with all of them,” meaning top management.

Condescending:
An account of Shaylor’s first day as EP says he addressed the staff saying, “I’m here to teach all of you to be better producers.” It didn’t go down well, and one staffer asked, “Who wants to learn from him when he doesn’t take responsibility for producing?”

Blithely Unaware:
Former EP DiCarlo is credited with creating a feel good vibe in the office that Shaylor erroneously believes is intact. “I think the new guy sees it as a family because he’s so oblivious as to how people see him … he’s the father that doesn’t know the kids don’t like him.”

And where is Wolf?:
The show’s host is “conflict avoidant” and “not an emotional person,” the report summarizes. He’s said to be afraid of rocking the boat at CNN after widespread layoffs, and has ultimately given in to Shaylor’s management style.

“The Situation Room” with Wolf Blitzer airs weeknights from 5-7 p.m. ET on CNN.