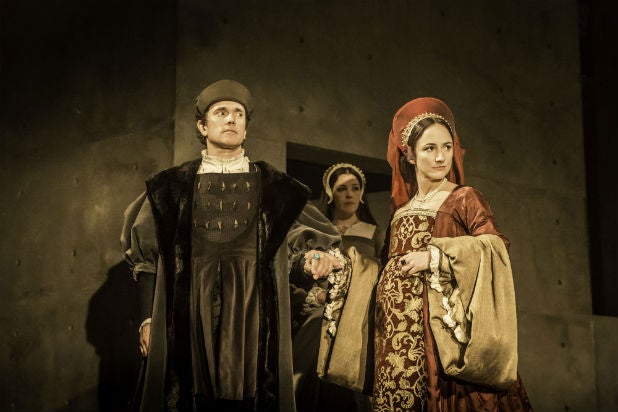 The British royals continue their occupation of Broadway this spring, with Peter Morgan’s tepid “The Audience” now followed by the Royal Shakespeare Company’s production of “Wolf Hall: Parts One & Two,” which opened Thursday at the Winter Garden Theatre in New York.

Anyone who sits through all six hours of “Wolf Hall,” by Hilary Mantel and adapted by Mike Poulton, will understand why the royal family has degenerated to its current state of ossification, as evidenced by Helen Mirren’s Elizabeth II in the Morgan’s play. Kings and queens didn’t used to be boring figureheads; they were once powerful and utterly mad, and it took a can-do lawyer like Thomas Cromwell (Ben Miles) to bring order to the court of Henry VIII (Nathaniel Parker) and, in the process, kick off the English Reformation .

For starters, watching these two plays — “Wolf Hall” and “Bring Up the Bodies,” as part two is titled — is nothing like reading the novels. In the latter, Mantel creates a magnificent panorama of Henry’s England, but she doesn’t always bother to introduce her characters or let you know who’s speaking some of the time. The plays, on the other hand, are “16th Century England for Dummies,” even for Americans who think Thomas and Oliver Cromwell are one and the same.

While Poulton is brilliant at disguising tons of exposition as genuine dialogue, “Wolf Hall” takes a good 90 minutes and one intermission to settle into what might be called a good drama. The swirl of characters and incidents is so intense that watching “Wolf Hall” turns theatergoing into grandiose scorekeeping.

But amid all the Cromwell-orchestrated machinations between Cardinal Wolsey (Paul Jesson) and Henry VIII as they try to get the king’s marriage to Katherine (Lucy Briers) annulled so he can marry Anne Boleyn (Lydia Leonard), there’s a telling moment where Henry realizes that Cromwell, while he doesn’t know much about war, does know how to pay for one.

“You know money though, don’t you?” Henry said. “Wolsey says you know the value of every monastery in my realm.”

Cromwell replied, “Monks are very cunning when it comes to hiding their wealth. But the full amount could be brought to light.”

Cromwell also seems to be the only one smart enough in England to know that nuns and popes aren’t mentioned in scripture, and there’s no law that can’t be made better if it’s rewritten to suit the king’s purpose. That shift of power from the Henry to Cromwell is when “Wolf Hall” genuinely begins to fascinate, and it continues to fascinate well into “Bring Up the Bodies.”

Cromwell negotiated the way Eliot Ness handled a tommy gun, and the fun and humor of “Wolf Hall” is watching what Cromwell will think of next to please the king or get rid of an adversary. Miles closely resembles Robert Stack in that vintage TV series “The Untouchables”: He maintains an implacable façade regardless of what he’s thinking, and that Miles rivets our attention for six hours makes his performance a masterclass in minimalist acting.

“Wolf Hall” and “Bring Up the Bodies” could be subtitled “The Rise and the Further Rise of Thomas Cromwell.” Mantel, needless to say, is now working on the third installment of her trilogy, “The Mirror and the Light,” and we know how it ends: This time Cromwell’s head is the one that rolls. But that creates a problem for the first two-thirds of what one imagines will someday be a nine-hour stage trilogy. For those first six hours, Cromwell ascends in the court with barely a kerfuffle. Things get a little tense when Cromwell has to extricate himself from Woolsey, and much later Henry suspects that Cromwell may fancy himself the real power behind the throne. But these are minor problems that are resolved almost as soon as they are introduced. And frankly, no one else is in Cromwell’s class, and that includes the Henry the loud-mouth dolt, Anne the total shrew, Wolsey the cuddly pragmatist, and Thomas More (John Ramm) the tight-ass bore.

However, in this age of 90-minute two-handers, who can complain about watching 23 talented actors being expertly traffic-directed by Jeremy Herrin on Christopher Oram’s unit set of concrete slabs, which manages to be both grand and spare, and where every shift in time, locale and the weather is made utterly clear through the superior art of the lighting designers, Paul Constable and David Plater?