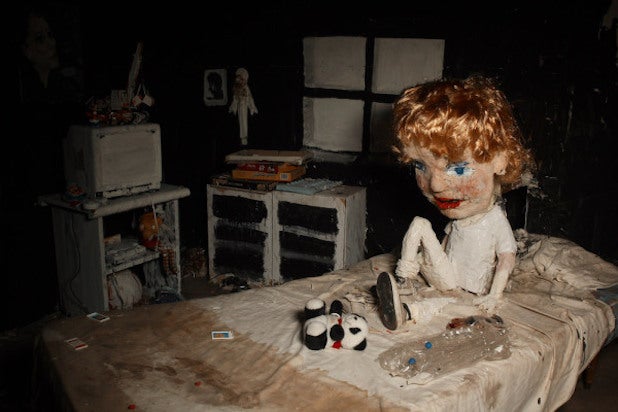 Walls are ever-morphing canvases in the ghastly realm of “The Wolf House” (“La casa lobo”), a mind-blowing stop-motion animated feature concerning how allegorical storytelling is exploited for fear and psychological manipulation. Chilean co-directors Joaquín Cociña and Cristóbal León graduate their uncanny yarns of sentient rooms and macabre beings from the short format into a full-length nightmare.

In the film, which opens on VOD and virtual cinema on May 15, viewers are asked to interpret the piece as an old production created by the Colony, an actual German community that lived in the countryside of southern Chile mostly isolated from sinful modernity — similar to the Amish of Pennsylvania or the Mennonites in Carlos Reygadas’ northern Mexico-set “Silent Light.”

A male voice, the Wolf (Rainer Krause), leader or spokesperson, asserts in accented Spanish that the filmmakers have restored the movie as a publicity move to mitigate the dark rumors surrounding the group. Outsiders may know the Colony for their immaculate honey, yet the sweet elixir, good for catching flies or acolytes, may have the same deceitful taste as the cautionary fable they’re selling.

The title cards tell us that young and beautiful Maria (voiced by Amalia Kassai) has escaped the safety of the ultra-traditionalist settlement after being punished for setting a few pigs free. If there’s another, darker reason for her leaving, we are not told. This is, after all, the official chronicle directly from the puppet masters.

Her safe haven becomes an empty home in the woods, where two of the hogs she saved evolve into human children, Pedro and Ana, without the ability to speak. Lines that shift between German and Spanish express how afraid she is the Wolf may blow it down and take her back. The film’s effective illusion of being an uncut single shot evokes a hypnotic and nonstop ride though a cerebral haunted house, hiding transitions in close-ups and in the shadowy sketches that construct her new abode.

Maria first materializes as an animated drawing on the wall. She then dissolves back into a liquid before being reborn in three-dimensional form right in front of our eyes. Painted cardboard covered in masking tape gives her the gleam and consistency of a papier-mâché sculpture. Her state, as well as the other characters, fluctuates between a tactile one with volume and a flat two-dimensionality.

An in-between configuration — half paint and half solid material, with limbs or even heads emerging from the surfaces — makes the residence itself an extension of their bodies. Late in the final act, a new version of the protagonists, now plushy dolls made of fabric, is engendered for an instant, perhaps calling back to an approach the directors have used in previous narratives.

The painted backgrounds are artificially fluid, since the effect is created with still images. They’re also in a perpetual state of flux, and the way they interact with other components heightens the sense of physical captivity and dreadful instability. Every rearrangement of the space replenishes Maria’s fear.

Unlike Laika’s approach to stop-motion animation, in which figures have articulations and replaceable faces, models here are in an endless metamorphosis, destroyed and reconstituted from inexpensive materials. Cociña and León have favored these signature techniques of rough malleability and moving murals for years. Their painstaking craft results in a jaw-dropping achievement worthy of any and all animation-related awards. In both concept and execution, “The Wolf House” will render you awestruck.

Classic European fairy tales, from the obvious “Peter and the Wolf” and “The Three Little Pigs” to “Hansel & Gretel,” “Snow White” and “Goldilocks and the Three Bears” mingle in a potpourri of magical notes laden in eeriness. It’s the Disney’s Golden Age enchantment by way of horror master Wes Craven, done with resourceful virtuosity that sets the artistic duo on their way to become the South American equivalent of the Brothers Quay -Sharon- strikingly weird, but always scrutinizing the human psyche.

At some point, Maria’s house reveals itself as a conscious entity, the Wolf himself, taunting her that she is never out of his sight. She remains trapped even when away, because the Wolf’s domain (that of the Colony, of course) is not limited to any geographical area or structure; it’s omnipresent. The moral of her story is that the slight sense of progress and hope she feels is false.

She lets her farm-animals-turned-children, Pedro and Ana, roam free without instilling the Colony’s terror-inducing teachings in them. As a result, they’ve been corrupted by vice — a child’s bedroom with imagery from popular shows, Mexican sitcoms and Japanese anime confirms it. The directors signal the kids’ jump from harmless individuals to frightening demons by giving them oversized heads.

This is a much more relatable premise than it seems. As young individuals, we are threatened with the monster under the bed or the witch who preys on young souls. In exchange for protection, parents expect good behavior. The looming horror keeps children in line; a cult applies the same principles but with exponentially more sinister motives. The evils of the world can’t hurt you, they say, so long as you remain loyal to your “family” and don’t question their rules.

A victim of indoctrination, Maria’s mind creates a familiar hell as a pathologically soothing version of normalcy, one less terrifying than the uncertainty of freedom. If the Wolf convinces her that what’s beyond the Colony is potentially worse than whatever punishment she has earned, then his perverse mission has been accomplished.

She is a compliant inmate in an intangible prison — maybe just like the rest of us in our own distinct ways. Have we run away from the wolf and succeeded, or are we still, unconsciously, in our personal colony?