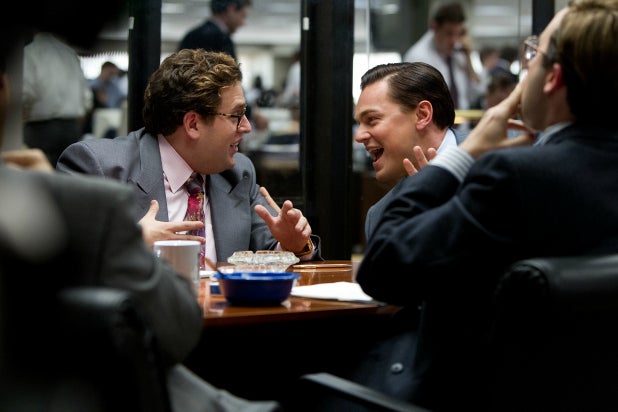 It’s a tale of two hairpieces.

The producers of “The Wolf of Wall Street” are biting back at one unhappy broker’s $25 million defamation suit against the Oscar-nominated film, claiming in court filings that their right to free speech supersedes his right to privacy.

In court filings, Paramount Pictures and Red Granite Productions are asking a New York federal judge do dismiss the suit by Andrew Greene, a former employee of Stratton Oakmont, and noting that his isn’t the only thinly disguised receding hairline to inspire a key character in the Oscar-nominated film.

In a February filing, Greene said that despite the fact that the film does not use his real name, jokes about his hairpiece and certain biographical details are clearly based on his life and career and the notorious brokerage firm.

He said the film’s depictions of him consuming drugs, frequenting prostitutes and engaging in financial fraud have hurt his professional reputation, to say nothing of that dreadful rug. However, attorneys for Paramount and Red Granite note that Greene’s Wall Street adventures are one of many inspirations for the character of Nicky “Rugrat” Koskoff. In real life, Greene and his dubious head of hair were christened “Wigwam.”

“The Film is a dramatization inspired by true events surrounding the hundreds of millions of dollars of securities fraud perpetrated by a company called Stratton Oakmont,” the filing reads. “As explained in the Film’s credits, the Film employed composite characters to tell the story of the antiheroic protagonist, Jordan Belfort. “

Moreover, Greene wasn’t the only member of Jordan Belfort‘s orbit with questionable ethics and a shoddy toupee, Paramount and Red Granite attorneys note.

“The viewers who had read the underlying Book would know that the Book described two financial executives affiliated with Stratton Oakmont who used ridiculous hairpieces,” the suit reads.

The suit notes that the autobiographical novel that inspired the movie also included a character named Gary Kaminsky, the chief financial officer of Dollar Time Group, a publicly traded company involved with Stratton. Kaminsky is eventually indicted and jailed for money laundering, and in the book, he is described as having “a ridiculous salt-and-pepper toupee that was an entirely different color than his sideburns, which were ink black–apparently dyed that way by a colorist with a good sense of humor.”

The character that Greene claims is based on him introduces Belfort to dodgy Swiss bankers in the film, when Kaminsky was actually the person who paved the way for that illegal scheme, the suit argues.

Attorneys for the film’s producers and for Greene did not immediately respond to requests for comment.