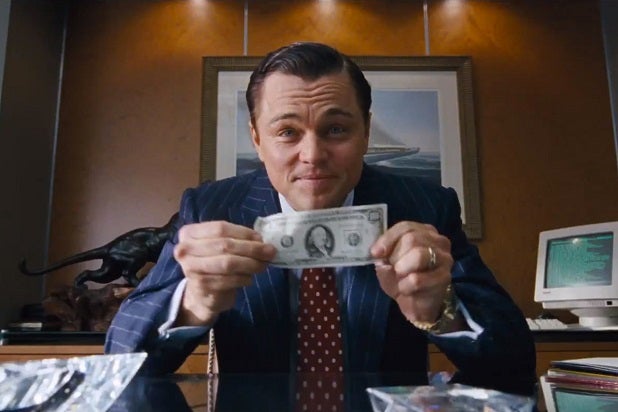 The controversy over “The Wolf of Wall Street” appears to have helped it at the box office.

Director Martin Scorsese‘s R-rated black comedy starring Leonardo DiCaprio finished a solid fourth this weekend with $13.5 million on 2,557 theaters. That’s only a 28 percent drop from the $18.3 million first weekend for “Wolf,” and encouraging news for distributor Paramount, since a 50 percent hold is considered good and the severe weather on the East Coast probably cost it another million dollars.

The R-rated film’s explicit portrayal of the sex-and-drugs-fueled 1980s stock market boom has divided moviegoers, and the “C” CiinemaScore that it received after its opening made its long-term playability a question mark.

But the strong second week suggests the emotional discussions – centering on whether it glorifies the lifestyle of DiCaprio’s character based on real-life stockbroker Jordan Belfort – aren’t hurting and may actually help it.

“We embraced the controversy and dialogue, because ultimately it makes more people aware of the film and curious, and we think if we can get people out, the film will speak for itself,” Paramount’s distribution chief Don Harris told TheWrap. “This weekend number is significantly above what we were projecting.”

The film’s roughly three-hour running time is a hurdle, too, but Harris said that moviegoers that have carved out time to see the latest Scorsese-DiCaprio teaming have found two things surprising.

“They say, ‘I didn’t think it was that long, and I didn’t expect to laugh so much,” he said.

If “Wolf,” Scorsese or DiCaprio can get some love at next Sunday’s Golden Globes and the Jan. 16 Oscar nominations it should get a further boost.

“This is up there with Scorsese’s best work, and that’s why this film is going to do just fine,” said Harris. “The Wolf of Wall Street” scored a strong 76% among film critics on aggregrator site RottenTomatoes.com, with an even more impressive 79% from fans.