Set in a gloomy house where you can almost make out shapes skittering through the shadows, “The Woman in Black 2: Angel of Death” is the kind of horror movie where you can see the smart, stylish scare film that’s constantly being obscured by cheap and easy jolts.

Director Tom Harper and screenwriter Jon Croker offer up plenty of the atmosphere we’ve come to expect from Hammer horror films — both in the studio’s heyday and in its latest incarnation — but every good idea this sequel has to offer winds up taking a backseat to the most obvious cat-in-the-closet “BOO!” moments imaginable.

Give “Woman in Black 2” this much credit: it makes the most out of its setting, in terms of both time and place. The geographical location is Eel Marsh Manor, the moldering house (complete with extra-creepy nursery) that vexed Daniel Radcliffe‘s character in the previous movie two years ago, and the time is 1941, when German planes regularly showered bombs over London.

Kindly schoolteacher Eve (Phoebe Fox) and her more stentorian boss Jean (Helen McCrory, “Penny Dreadful”) are escorting a group of children away from the dangers of the Blitz and out into the countryside. One of the kids, Edward (Oaklee Pendergast, “The Impossible”), comes to the expedition freshly orphaned as a result of a bombing the evening prior, and communicates only with pencil and paper. 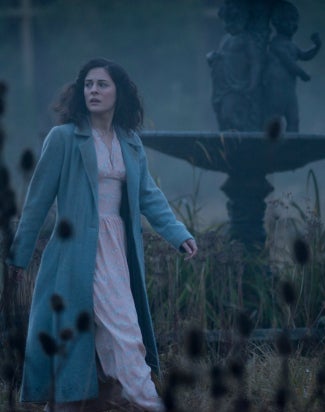 On the train, Eve meets handsome flyboy Harry (Jeremy Irvine, “War Horse”) but that’s one of the few upsides of the trip. When the group arrives at the isolated village, Eve encounters a blind man yelling threats before they all arrive at the decrepit manor house.

The most interesting notion that “Woman in Black 2” offers, even though it never explores it as fully as it should, is that these characters were all literally haunted even before they arrive at the spooky house. Edward isn’t the only one dealing with personal loss, as we get to know Eve’s, Jean’s and even Harry’s past regrets and sorrows. So when the hideous Woman in Black (Leanne Best) starts appearing, it’s to people who are already acquainted with their own personal darkness.

Like its predecessor, “Woman in Black 2” doesn’t shy away from making children the victim of ghostly machinations, and as the characters begin dropping off one by one, it’s up to the adults to look inward before they can come to anyone else’s rescue. Pity, then, that director Harper (a vet of British TV series like “Peaky Blinders” and “Misfits”) shoots for the lowest denominator of scares.

The cast is engaging — Irvine and stage actress Fox generate real chemistry — and the spot-on period detail and eerie cinematography (by George Steel) could have gone much further toward maintaining an unsettling mood had the script been more willing to enrich the characters and follow them into the abyss of their tormented psyches.

Every so often, “The Woman in Black 2” threatens to become a deeper, richer experience, but that potential, like the title character, disappears as soon as you turn your head.