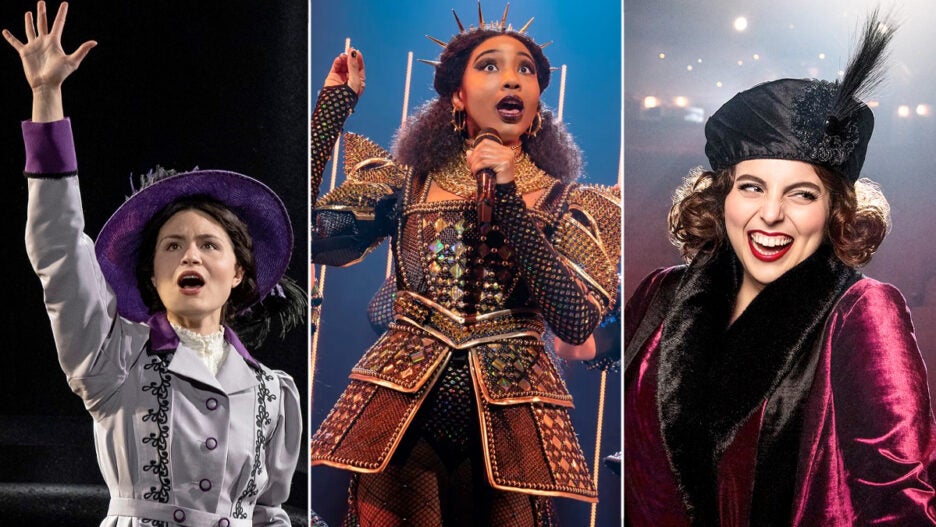 The anticipated Broadway show “POTUS” is not about him, but about seven women who make a White House function. The wildly popular “Six” tells the stories of the half dozen ex-es of Henry VIII. The inventive and powerful “Suffs,” now at the Public Theater, is about the 19th amendment that gave women the vote, featuring only women (Including one playing Woodrow Wilson). Selling out every preview on Broadway is that funny girl (now played by Beanie Feldstein), back after some 60 years.

Yes, the stages of New York are filled with a record-smashing number of productions by and about women. The legendary producer Daryl Roth, a producer of the upcoming “Between the Lines,” about a young woman’s growing pains, says, “The current scene is encouraging, but honestly, it’s never enough. The more women we have writing, composing, directing and designing for the theater, the more vibrant the landscape will be. “

Since women make up the majority of most live theater audiences, it makes sense. It also helps to have producers like Roth, and Dale Franzen, a Los Angeles-based Tony winner for the musical “Hadestown,” involved with a Broadway revival of “For Colored Girls Who Have Considered Suicide/When The Rainbow Is Enuf,” which is now in previews. (As well as a one woman show soon to open in London, starring Jodie Comer.)

“With ‘Hadestown,‘ I didn’t think twice in partnering with another woman,” Franzen said. “I realize that is not the same for other types of folks, or women would not be 23% of Broadway producers! I am drawn to untold stories about women and there are so many historical and also fictional ones that need telling.” 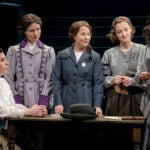 Those stories resonate, sometimes accidentally. Michelle Kholos Brooks is the playwright behind “Hitler’s Tasters,” a drama about young women who were honored to risk their lives to ensure the Fuhrer’s that opens soon on Off Broadway’s Theatre Row. “Who knew the world would be watching another autocrat at this time?” she said. “More important, there is not a woman in the world who has not felt the fear brought on by an unhinged male with power.” “Hitler’s Tasters” has its share of laughs, something mastered by Brooks’ father- in- law, Mel, who created a pretty funny piece called “The Producers.”

“Americano!” which opens soon at New World Stages, was written by former New York Times reporter Fernanda Santos, making her first foray into theater. “I never imagined I would write for the stage,” she said, “but I did so much reporting about young immigrants who were not afraid to speak up, so I fit the bill. Women can be our own worst enemies when we restrain ourselves from trying new things.”

One of the most anticipated is “POTUS,” a comedy from Selina Fillinger, a young playwright who is also a writer on Apple TV+’s “The Morning Show.” “The setting is simply a framing device for a larger thematic discussion,” Fillinger said. “For years, we’ve had this endless news cycle of men abusing their power, and I’m always fascinated by the women orbiting them.” The farce, directed by Tony winner Susan Stroman, boasts a cast that includes Rachel Dratch, Julie White and Vanessa Williams. 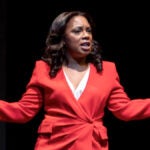 The fact that women can be funny is not a new realization, but it’s prominently displayed as never before. Talene Monahan’s “Jane Anger” is a recent LOL piece that starred Michael Urie, and dealt with the women in Shakespeare’s life. Byrna Turner’s “At the Wedding” is a hilarious and perceptive 70-minute play currently at Lincoln Center’s smallest venue.

There are not many laughs in “Suffs,” about the diverse group of women who fought for the vote. The politically themed and colorblind-cast show, created by Shaina Taub, is performing in the same theater where “Hamilton” was born. I predict it too will move on to Broadway and Pulitzer Prize fame.

For women of color, of course, telling those stories is crucial. “We need to know that we matter,” said Stacey Sargeant, one of seven (colors of the rainbow) performers in “For Colored Girls…” “With this show, we get to commune and have full experiences as performers without having to be apologetic about who we are and all the colors of life we experience as Black women living in America.” “Paradise Square,” a new musical that opened last week on Broadway with a book co-written by Christina Anderson and lyrics by Masi Asare, centers on a powerful Black woman (played by past and future Tony nominee Juaquina Kalukango) running a saloon in the Five Points neighborhood during the Civil War.

And let’s not forget the successful productions continuing on the Broadway stages: Julie Taymor’s “The Lion King” is still roaring after 21 years; Katrina Lenk leads a gender-switched revival of Stephen Sonheim’s “Company” and female-empowerment standbys like “Tina” and “Wicked” continue to draw audiences. Even “Chicago” — with new cast member Pamela Anderson — is still on Broadway, focusing on those deliciously devious broads.