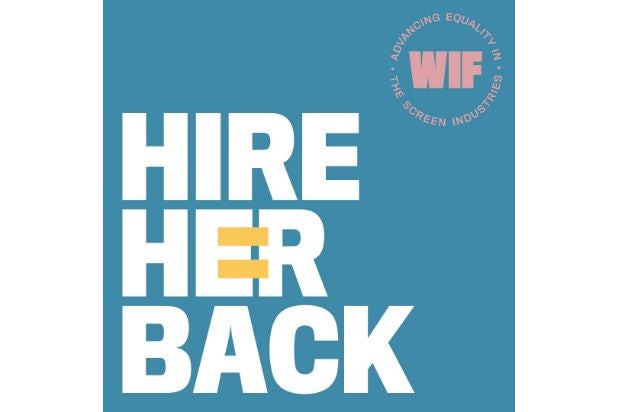 Women in Film Los Angeles launched the Hire Her Back Initiative on Wednesday. The initiative advocates the rehiring of women and people of color at the same rate and frequency as men as the entertainment industry looks to return from the coronavirus.

Hire Her Back is a multimedia campaign that will lean on women in the screen industries to urge employers to adhere to equality in hiring as the industry moves toward the return of film and TV production. And WIF will also partner with New York Women in Film & Television (NYWIFT) and Women In Film and Television Atlanta (WIFTA) to provide grants to women in film and TV whose livelihoods have been adversely affected by COVID-19. The grants will be administered by The Actors Fund.

“With the increased commitment to parity across the entertainment community in recent years, we are seeing an uptick in the number of women working in front of and behind the camera. We cannot lose this important momentum because of entertainment job losses related to the COVID-19 crisis,” WIF board president Amy Baer said in a statement. “I am so grateful for Shivani’s generosity and continued support for women in need. Having had the privilege of producing Brian Banks with her, I know firsthand how committed she is to elevating women and persons of color in the screen industries.”

“With the convergence of a pandemic and the national uprising in defense of Black lives, it must be made clear that current market structures have to be transformed if we are serious about creating equity,” WIF executive director Kirsten Schaffer said in a statement. “We call on leaders to join us in building a new normal that prioritizes equity and career sustainability for women, especially Women of Color, in the screen industries.”

According to the Labor Department figures for May, women’s unemployment was at 13.9%, two-and-a-third percentage points higher than that of men in the same time period. Additionally, roughly half a million jobs in the entertainment sector have been lost in recent months. Following the economic crisis in 2008, women regained employment across all sectors at a much lower rate than men and took longer to rebound. WIF notes that there is ample evidence suggesting the same will be true for women rebounding from the COVID-19 crisis, in particular Latinas and black women who have faced some of the highest rates of unemployment of any group.

Seed funding for the initiative and the grants have been provided by producer Shivani Rawat, founder of ShivHans Pictures. Additional contributions to the fund can be made at wif.org. Information about applying for the grants will be available on the website in early July.