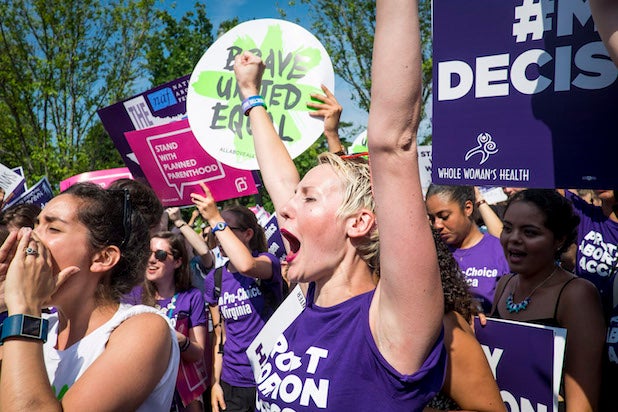 WASHINGTON, DC - JUNE 27: Abortion rights activists Morgan Hopkins of Boston, left, and Alison Turkos of New York City, celebrate on the steps of the United States Supreme Court on June 27, 2016 in Washington, DC. In a 5-3 decision, the U.S. Supreme Court struck down one of the nation's toughest restrictions on abortion, a Texas law that women's groups said would have forced more than three-quarters of the state's clinics to close. (Photo by Pete Marovich/Getty Images)

The Supreme Court voted Monday to strike down Texas’s abortion regulations, and women in Hollywood are ecstatic.

As TheWrap previously reported, the justices voted 5-3 to repeal restrictions that governed how abortion clinics operated.

Female stars including Lena Dunham, Mindy Kaling, Olivia Wilde and Elizabeth Banks took to Twitter and Instagram to share their excitement for another step of progress for women’s rights in America.

See the social media reaction below.

An important win for the continued protection of women's reproductive rights. Thanks, #SCOTUS. https://t.co/B8aBOf1sBz

Today is gonna be fun I can already tell

I fell on the floor in my kitchen in SoCal, crying. There are a lot of us crying with relief today. @ReproRights https://t.co/OxmOSMO7zB

GO SCOTUS! BLESS! Thank you for protecting the women of Texas and the people who love them! Thank you for sending a booming message that our bodies belong to US! (And yes I did Google “coven of witches dancing” to find a proper image for this moment.) Love to all you fighters who made your voices known!!!

Thank you #SCOTUS for affirming undue burden so we can choose to become undue!! #WholeWomensHealth #StopTheSham

hooray for #SCOTUS! but honestly, who wants to look at a picture of THOSE Supremes. The Supreme Court struck down parts of a restrictive Texas law that could have reduced the number of abortion clinics in the state to about 10 from what was once a high of roughly 40.