The rhetoric around inclusion in Hollywood, particularly for women and women of color, has gained steam in the last few years, but a new study from the USC Anneberg Inclusion Initiative found that little has changed for women in film in the last decade.

The study examined the portrayals of gender, race/ethnicity, LGBT and disability from across 1,100 popular Hollywood films from 2007 to 2017.

The prevalence of female speaking characters in film was higher in 2008 than it was last year, according to the study, and men in movies outnumbered women overall 2.3 to 1. 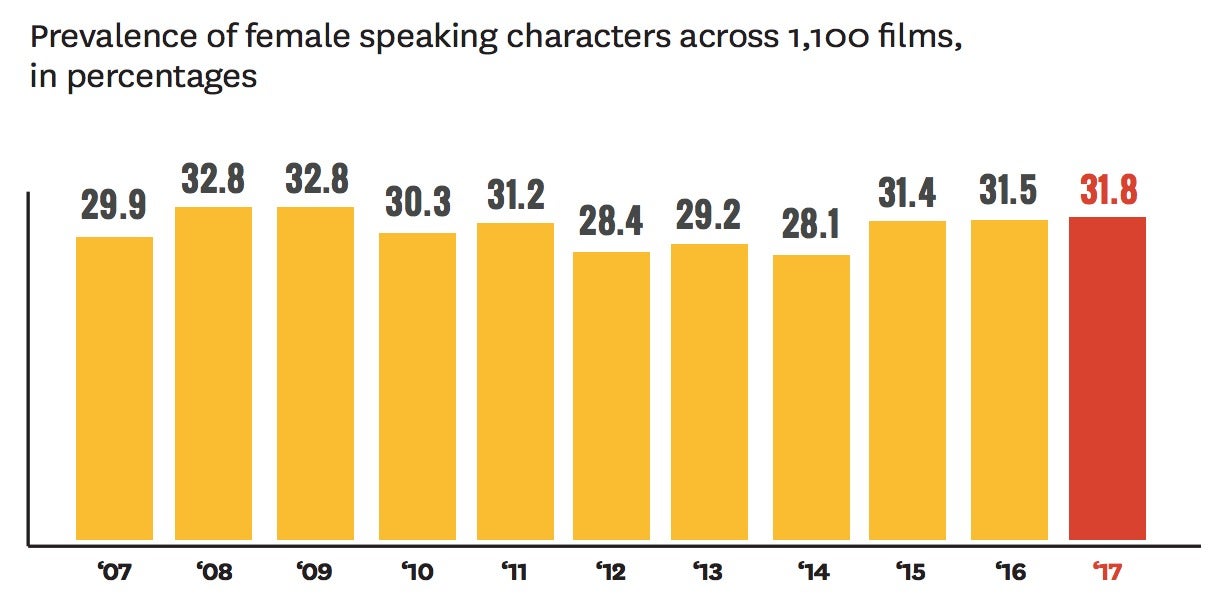 And of the top 100 films in 2017, 33 depicted a female lead or co-lead, and only four of these women were from an underrepresented racial or ethnic group. That represented no change from 2016.

“Those expecting a banner year for inclusion will be disappointed,” said Stacy Smith, founding director of the Annenberg Inclusion Initiative. “Hollywood has yet to move from talking about inclusion to meaningfully increasing on-screen representation for women, people of color, the LGBT community, or individuals with disabilities.

“In prior years, I have referred to these findings as the ‘epidemic of invisibility’ in film,” Smith continued. “After witnessing little change in these numbers, it is clear that Hollywood must do more to ensure that marginalized groups are a part of the fabric of storytelling.”

“The lack of inclusion on screen is matched and exceeded by the exclusion behind the camera,” Smith said. Across 1,223 directors over 11 years, just 4.3 percent were female, 5.2 percent were Black or African-American and 3.1 percent were Asian or Asian-American. “Once again, we see that women of color are most affected by exclusionary hiring practices. Just four Black/African-American women, three Asian women, and one Latina directed a film across the 1,100 we examined.”

As well as looking at the number of underrepresented groups on screen, the report examines how characters are depicted on screen, with a focus on parents, relational partners, age and sexualization.

Consistent with previous years, female characters were more than twice as likely as male characters to be shown in sexually revealing clothing, partially naked, or referenced as attractive. Teenage (13-20) and young adult (21-39) females were equally likely to be sexualized in films from 2017.

Smith offers solutions in the report and suggested focusing on the inclusion rider, which Dr. Smith shined a light on in the entertainment industry.

The study’s authors encourage industry stakeholders to collaborate with them to change and amend the existing template for the contractual clause. They suggested envisioning new ways to implement best practices and contract language that can contribute to changing on-screen and behind-the-camera diversity.

“Good intentions are not enough to create change,” Dr. Smith said. “Hollywood needs tangible, actionable solutions that will usher in real transformation. Our work brings to light the steps that companies and individuals can take if they want to see results.