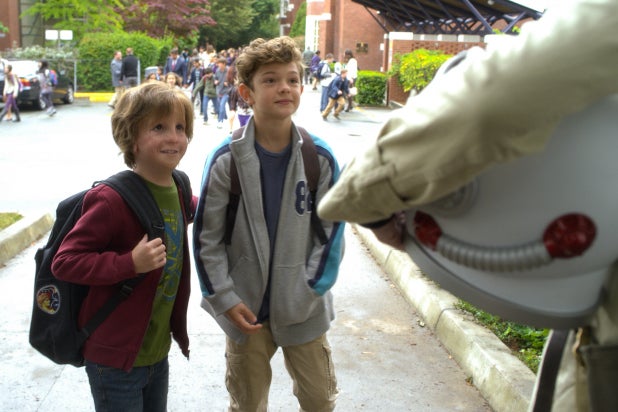 When a comedy pulls out the stops to get laughs, or a horror film goes to extremes to frighten its audience, we accept and even applaud these tactics as an inherent part of these respective genres. So if “Wonder” wants to be a tear-jerker — and that desire is stamped into pretty much every scene of the film — we can’t fault its single-minded desire to provoke a response.

Giving the film credit where it’s due, “Wonder” never cheats in its pursuit of emotion. It’s (almost) never mawkish or manipulative, and its characters are so well-established both in the writing and in the performances that the movie ultimately does the hard work of earning those damp Kleenexes. As with horror and comedy, those who are resistant to this kind of film will definitely resist this one in particular.

Adapting the novel by R.J. Palacio, director Stephen Chbosky (“The Perks of Being a Wallflower”) and his co-writers Steve Conrad (“The Secret Life of Walter Mitty”) and Jack Thorne (“Harry Potter and the Cursed Child”) throw out a wide net of compassion. “Wonder” is a story about a kid who’s different, yes, but it’s also about the people around him as well. Even the bullies get backstories and a shot at redemption.

The different kid is Auggie (Jacob Tremblay, “Room”), born with a congenital disorder that has caused him to have 27 surgeries in his 10 years of life, allowing him to breathe and to hear and also to reshape his face. But it’s still an unusual face, one that he prefers to hide from the world in his astronaut helmet. He’s got a loving family — and one of the biggest New York brownstones ever, even by movie standards — but it’s time for Auggie to meet the world.

His mom Isabel (Julia Roberts) has home-schooled Auggie all his life, but since fifth grade is a year when all the students will be attending a new school, she’s decided it’s time for her boy to leave the nest. The school’s principal Mr. Tushman (Mandy Patinkin) is supportive, although Auggie’s classmates do a lot of staring and then looking away. He’s actively bullied by rich-kid Julian (Bryce Gheisar, “A Dog’s Purpose”) but may find a friend in scholarship student Jack Will (Noah Jupe).

“Wonder” isn’t just Auggie’s story, though; we learn what it’s been like for his older sister Via (Izabela Vidovic, “The Fosters”) to grow up in a family where her younger brother and his medical issues get all the parental attention; how Isabel put her thesis aside to become a full-time mom (it’s been so long since she worked on it that it’s still saved on a floppy disk); who’s raising Jack Will and Julian and how that impacts their actions and attitudes; and why Via’s best friend Miranda (Danielle Rose Russell, “The Last Tycoon”) put pink streaks in her hair and dumped her former BFF.

It could have been very easy for this to be the sort of film that merely allows audiences to take a good, long look at a character with facial defects (while encouraging us to judge characters who do likewise), but instead, this is a celebration of empathy, a reminder that even the people who might be making us miserable have their own problems and their own people who are making them miserable. Its secret weapon is Tremblay, whose big, Keane-painting eyes defy you not to melt over Auggie and his travails, but it’s a solid ensemble through and through.

Nobody pivots from tough-as-nails to quivering mass of tears like Roberts, and she and Owen Wilson make for dream parents. (What Wilson does for a living, and how it allows him to keep this gigantic house while also spending so much quality time with his son, is never explained.) The other kids are all great as well, particularly Jupe, who was the only notable facet of “Suburbicon”; there’s nothing actor-ish about his curious eyes, and when Jack Will stands up for Auggie, we know our hero is in good hands.

Auggie’s health issues represent the closest thing to uncomfortable reality that “Wonder” would care to address. Cinematographer Don Burgess (“Allied”) gives us a picture-postcard Manhattan, where all the seasons have luster and all the streets are tree-lined and filled with nice folks. If the film strays too far toward shamelessness, it’s in putting a beloved pet in danger as well as giving us not one but two scenes with that dreaded cliché of uplift, the standing ovation.

If you can get past those, though, “Wonder” deserves its own round of applause for its unabashed emotionalism and kindness. It’s hard to traverse this ground without turning into a greeting card, but this is that rare film that juggles sentimentality and restraint.

Quvenzhané Wallis and Jacob Tremblay may be too young to drive, but they’re among the best and brightest of young Hollywood