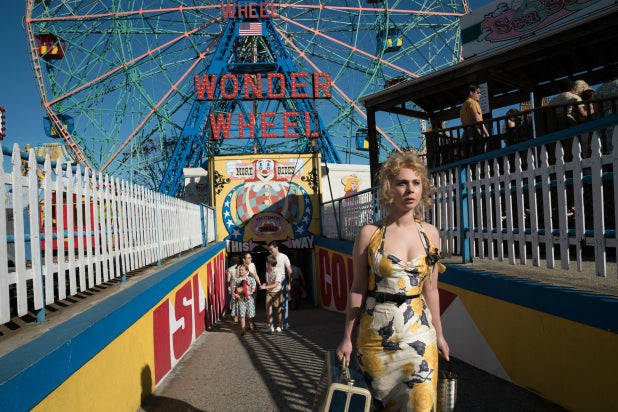 Woody Allen seems increasingly haunted by the Tennessee Williams play “A Streetcar Named Desire.” The basic situation of that Williams classic was reused for Allen’s “Blue Jasmine,” which won Cate Blanchett an Oscar, and it is repurposed again (but somewhat transposed) for “Wonder Wheel,” a film about a frustrated woman in 1950s Coney Island named Ginny (Kate Winslet).

Allen was often at his best in earlier films when he dealt with the character of a failed creative person, like Dianne Wiest’s Holly in “Hannah and Her Sisters,” but his sympathy for people like that has dried up over time. Ginny is a former actress who now waits on tables at a clam house on the boardwalk, but she tells herself that she is just playing the “thankless” part of a waitress.

She has a boorish husband named Humpty (James Belushi) whose young daughter Carolina (Juno Temple) is on the run from the mob, and Ginny is embroiled in an affair with a younger lifeguard named Mickey (Justin Timberlake) whom she sees as her last chance for escape.

One of Allen’s main dramatic subjects throughout his career has been the selfishness of people engaging in love affairs that are foolish, reckless, or inappropriate, and that is the animating principle of “Wonder Wheel.” Vittorio Storaro’s camerawork does a lot of the heavy lifting here, casting a magic hour glow over everything until Allen is ready to expose the romantic delusions of his characters.

When Winslet’s Ginny relates an important monologue about her past, Storaro has the light keep changing dramatically around her hair as she speaks, and there are times here when this great cinematographer indulges in what might be described as over-photographing. The beauty of the images sometimes feels like it is there for its own sake rather than for the sake of the narrative.

Blanchett got her Oscar for “Blue Jasmine” because Allen gave her the opportunity to break down and mentally unravel in a colorfully histrionic fashion in practically every scene. He has given Winslet a similar assignment and opportunity here, and she enters whole-heartedly into many demanding long takes where Ginny reveals her dashed hopes and her strident needs. This is a weak, sometimes deluded woman at the end of her tether who nearly always has a headache, and her desperation when it comes to holding on to Mickey’s affections starts to become very overbearing as the film goes on.

On the day of Ginny’s 40th birthday, Carolina cries, “It’s a milestone!” and Ginny snaps back, “It’s a tombstone.” Her destructive young son Richie (Jack Gore, “Billions”) keeps starting fires everywhere, and Ginny keeps yelling at everyone as she realizes that she is losing Mickey to Carolina. The stealing from “A Streetcar Named Desire” gets pretty shameless when we hear that Ginny’s young drummer husband committed suicide and that she always hears his drums in her head — just like Blanche DuBois always hears the waltz that was playing the night her own young husband killed himself.

Allen is 81 years old, yet he still has retained the romantic point of view of a teenager who hasn’t seen or experienced much of anything yet about life. Mickey wants to be a playwright, and he speaks with Ginny about tragic plays and how tragic protagonists are destroyed by a fatal flaw, but Allen is too self-aware and cold a creative personality to create a genuine tragedy in “Wonder Wheel.” Instead, he makes a gesture towards a tragic situation.

He knows what a tragedy would be like theoretically, but he is unable to create one himself because he doesn’t have enough conviction to do so. Allen’s writing oscillates here between stilted dialogue that sounds like dialogue and the kind of formality of phrasing that is probably an echo of his own youth in Brooklyn in the 1950s.

Towards the end of “Wonder Wheel,” Ginny retreats back to the shack she shares with Humpty, and she puts on an old costume from a play she was in, just as Blanche DuBois puts on an old Mardi Gras outfit in the penultimate scene of “Streetcar.” At one crucial point, Storaro floods Winslet’s face with white light so as to strip her character bare, but what we see is an actress straining in a wordy role, not the soul of the ruined Ginny.

Allen is one of our greatest comic artists. But when it comes to drama, he is usually too distant and remote from his characters to make them live for us or to make us care for them.