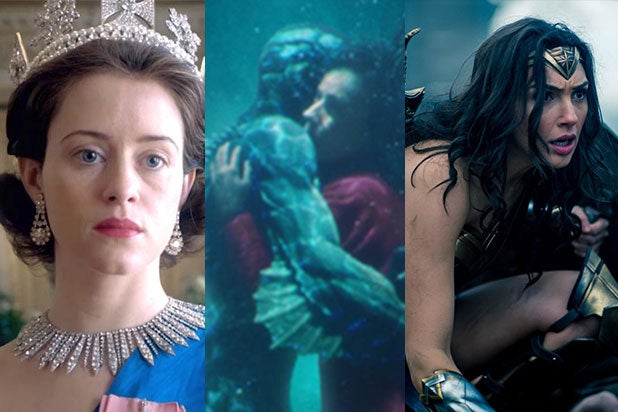 The American Film Institute has issued its annual list of top movies and TV shows for 2017, where presumptive Oscar contenders reigned and one superhero lassoed a big surprise.

“Wonder Woman” was one of their ten best of the year, selected annually by the prestigious group. It joins buzzy award titles “The Post,” “The Shape of Water,” “Call Me By Your Name,” “Dunkirk” and “The Florida Project.”

On the TV side, HBO’s Emmy magnet “Big Little Lies” made the cut, as did Issa Rae’s “Insecure” and the juggernaut “Game of Thrones.” Netflix was represented in the form of Claire Foy’s “The Crown,” Aziz Ansari and Alan Yang’s “Master of None” and the second season of the Duffer Brothers’ “Stranger Things.”

NBC’s “This Is Us” was an obvious choice, but the peacock network earned their own surprise with Mike Schur’s “The Good Place.”

“At a time when the world seems defined by division, storytellers bring us together as one,” said Bob Gazzale, AFI President and CEO.

Gazzale said the group was “honored to celebrate this community of artists who challenge and inspire us, entertain and enlighten us — ultimately reminding us of our common heartbeat.”

AFI also awarded a special prize to the PBS series “The Vietnam War.” The group will honor all the winners on Jan. 5 at a private luncheon in Los Angeles. Carmaker Audi presents its eponymous Fellowship for Women to a female director at the annual event — which will cover the recipients’ tuition to the AFI Conservatory.

AFI MOVIES OF THE YEAR

THE BIG SICK
CALL ME BY YOUR NAME
DUNKIRK
THE FLORIDA PROJECT
GET OUT
LADY BIRD
THE POST
THE SHAPE OF WATER
THREE BILLBOARDS OUTSIDE EBBING, MISSOURI
WONDER WOMAN

AFI TV PROGRAMS OF THE YEAR

BIG LITTLE LIES
THE CROWN
FEUD: BETTE AND JOAN
GAME OF THRONES
THE GOOD PLACE
THE HANDMAID’S TALE
INSECURE
MASTER OF NONE
STRANGER THINGS 2
THIS IS US

Marking the 18th chapter in the American Film Institute’s ongoing almanac of the moving image, the 2017 entries join a notable pantheon of previous AFI honorees — works of significance that contribute to the rich cultural legacy and define the state of the art form. View the complete almanac here.

AFI AWARDS selections are made through a jury process where AFI Trustees, scholars, artists and critics determine the year’s most outstanding achievements and provide contextual rationales for each selection.