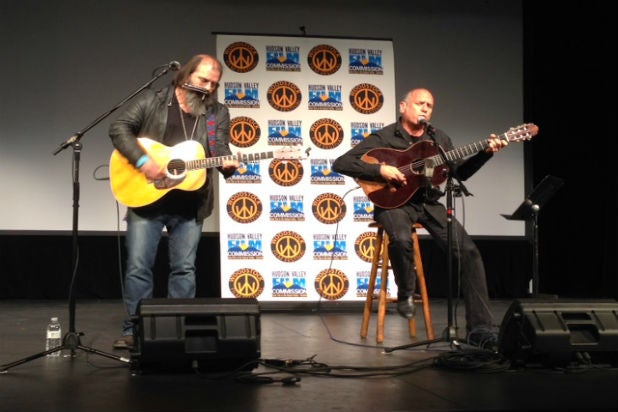 Woodstock, New York: As one would expect in the town that put rock and roll on the map almost a half decade ago, music and politics was the theme at the Woodstock Film Festival’s kick-off event Wednesday night.

The world premiere of “East Jerusalem/West Jerusalem,” a documentary about Israeli superstar musician David Broza’s efforts to use music to cross the Israeli/Palestinian cultural divide, set a high bar for the rest of the 15th annual edition of this festival that has become more than a pretext for a leaf-viewing fall weekend away from New York City.

By focusing on the creation of Broza’s last album, a joyful collaboration between Palestinian and Israeli musicians produced by legendary singer/songwriter Steve Earle (who had a guest starring role in “The Wire”) in a tiny studio in Palestinian-controlled East Jerusalem, Israeli filmmakers Erez Miller and Henrique Cymerman manage to inject a sense of optimism into a conflict that often seems desperate and without solution.

Broza, who divides his time between Tel-Aviv and New York City, and Earle first got together when they discovered they were both working on albums of Townes Van Zandt tunes. Van Zandt, a poet/musician, but also a hopeless alcoholic and addict who died in 1997, had influenced both men. Earle calls Van Zandt his mentor and Van Zandt left a trove of unpublished poems and song lyrics to Broza asking that he put them to music. Both men are peace activists, both are musicians’ musicians; Earle had even written a heart-rending ballad “Jerusalem,” which is on the album, though he had never traveled there.

The film tells several stories. Besides documenting the making of the “East Jerusalem/West Jerusalem” album, there are tales of relationships between Israelis and Palestinians like Broza’s lifelong friendship with Israeli Arab musician Issa Freij, with whom he reminisces on the rooftop of Freij’s 200-year-old family home in East Jerusalem on Jerusalem Day, where below them Arabs and Jews spew hate at each other. Broza’s musical work with the children in the concrete jungle of the Shuafat refugee camp within East Jerusalem is highlighted, as are the Israeli and Palestinian children, many now friends, who make up the Youth Choir of Jerusalem and who are featured on the album.

Despite the tension in the world outside the studio, inside, over the course of eight days, optimism reigns.  Israeli Arab singer Mira Awad’s haunting Arabic rhythms combine seamlessly with Broza’s Spanish-influenced guitar playing, young Palestinian hip-hop artist Muhammad Mughrabi raps in English, “P-E-A-C-E, that’s the word I wanna be,” Earle’s “Jerusalem” becomes even more haunting after his having spent a week exploring the city.

Even director Miller who calls himself “a cynical documentary filmmaker” could not help but be moved. “It taught me a lesson: that it pays to be naïve,” he said. “I’m usually so conflicted. I feel Israeli, but when I see all the bad things happening in the territories, it’s confusing. There are guilt feeling and feelings of compassion for both sides.  But since making this film, there are actually some days when I, too, believe that music can change the world.”

Andréa R. Vaucher, has been writing about media, the arts, style, travel and spirituality for over two decades. She began as a film critic at the LA Weekly, was a founding editor of Venice Magazine and was the Paris bureau chief and European correspondent for Variety. Her work has appeared in The New York Times, the LA Times, Tricycle, The Washington Post, The Boston Globe, among others. She is the author of "Muses From Chaos and Ash: AIDS, Artists and Art" (Grove Press), the first book to explore the effect of the AIDS crisis on the international art community. She is currently finishing a novel, "Venice/Venice."