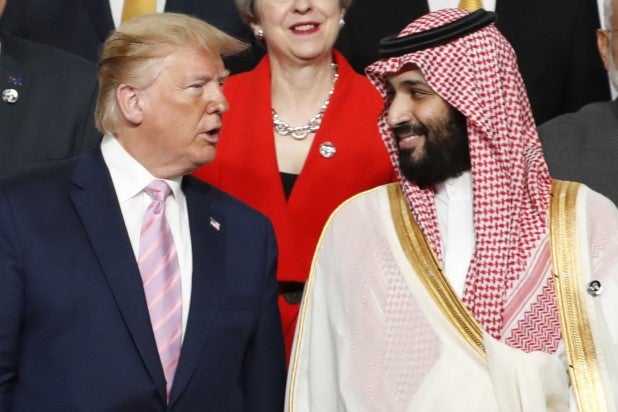 Business Insider obtained a copy of Woodward’s forthcoming book, “Rage,” and reported Thursday that Trump said during one of his interviews for the book, “I saved his ass. I was able to get Congress to leave him alone. I was able to get them to stop.”

Shortly after Khashoggi, a columnist for the Washington Post, was killed and dismembered at the Saudi Consulate in Istanbul in October of 2018, the CIA concluded the crown prince himself ordered the assassination.

When Woodward first questioned Trump about the killing, pointing out that “people at the Washington Post” — where he is now an associate editor — were “upset” about it, the president redirected: “Yeah, but Iran is killing 36 people a day, so –“

When pressed by Woodward on whether he personally believed bin Salman, Trump replied by telling the veteran journalist how much Saudi Arabia spends on American products, saying, “He says very strongly that he didn’t do it. Bob, they spent $400 billion over a fairly short period of time.”

John Haltiwanger, one of the Business Insider reporters who secured the book and published Thursday’s revelation, tweeted a photo of the page in question. “Rage” comes out Tuesday.

Here is the relevant passage from Woodward's book, which alleges that Trump boasted about saving MBS from congressional backlash after Khashoggi's murder. Trump also changed the subject to deals he struck with the Saudis when asked if he believed MBS ordered Khashoggi's murder. pic.twitter.com/GQF8itnFXC