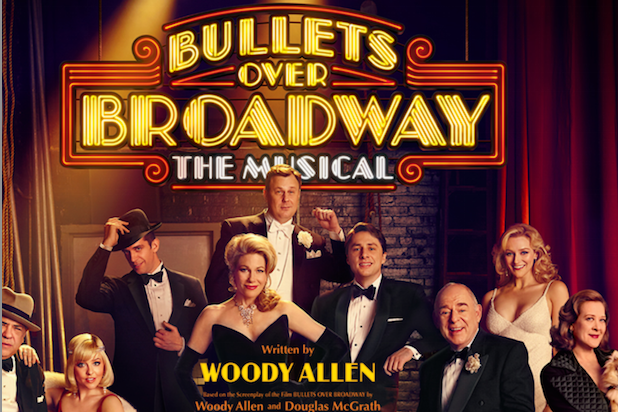 Woody Allen is at the center of a scandal that could shoot out the lights on “Bullets Over Broadway: The Musical.”

Dylan Farrow’s shocking and vivid recollections of alleged abuse at the hands of her adopted father has propelled the story of Allen’s messy break-up from Mia Farrow and charges of sexual assault back into the national conversation just as the show is gearing up for its premiere this spring.

Allen denies the charges and called them, “disgraceful,” but they have thrust the director, the allegations and his marriage to Farrow’s adopted and decades-younger daughter Soon-Yi Previn into the media glare.

The claims are decades old, but they have never been recounted in such detail by Dylan herself, and their appearance on the blog of Pulitzer Prize-winning New York Times columnist Nicholas Kristof gave them wider reach and heft.

At this point, it’s unclear how the revived charges will affect the Broadway adaptation of Allen’s 1994 film starring Dianne Wiest and John Cusack. Privately, a few producers, theater executives and publicists expressed shock over the charges. Publicly, they declined to go on the record, admitting they wanted to steer clear of the controversy.

A spokesman the show’s producers declined to comment and referred requests to Allen’s personal publicist.

Allen co-wrote the script, and his involvement likely helped attracted show backers. If a New York Daily News report from January is to be believed, producers were sufficiently concerned that Mia Farrow and son Ronan Farrow’s public comments about the child molestation claims would hurt ticket sales that they met to discuss a plan to de-emphasize Allen’s name in promotional materials (it’s still there).

The adaptation of Allen’s Oscar-nominated 1994 comedy was always going to have its challenges. Its biggest star Zach Braff is a “name,” but in the theatrical firmament he’s relatively untested and not as well known as some of the Hollywood talent who routinely hit the Great White Way. Likewise, the list of musical adaptations of films is a mixed bag. For every Tony-winning hit such as “Hairspray” or “The Lion King,” there’s a box office dud such as “Catch Me if You Can” and “Urban Cowboy.”

“Bullets Over Broadway” faces an additional hurdle. The film was a hit with critics and won an Oscar for Wiest, but it only made $13.3 million at the box office, failing to recoup its production cost. Given that twenty years have passed since it was in movie theaters, re-acquainting audiences with a film they might never have seen to begin with was always going to be a challenge regardless of the sex scandal that erupted last weekend.

Then there’s the make-up of Broadway audiences, which tend to be middle-aged females from out of town. Sixty eight percent of ticket buyers were women last year and 66 percent were tourists, according to data from the Broadway League.  The average Broadway theater-goer was 42.5 years old.

With a month to go before previews and two months before opening night, it’s possible that the furor over the sex assault allegations will dissipate. It’s also, as one astute Broadway observer noted, the case that many audience members have successfully compartmentalized Woody the artist as existing independent of Woody the man. After all, Allen has churned out nearly a film a year, earning Oscars and acclaim.

Two of his most recent efforts, “Midnight in Paris” and “Blue Jasmine,” were among his most successful pictures  to date. “Bullets Over Broadway” could continue the hot streak if the show is funny enough to convince audiences to abandon any preconceptions about its writer at the theater door.