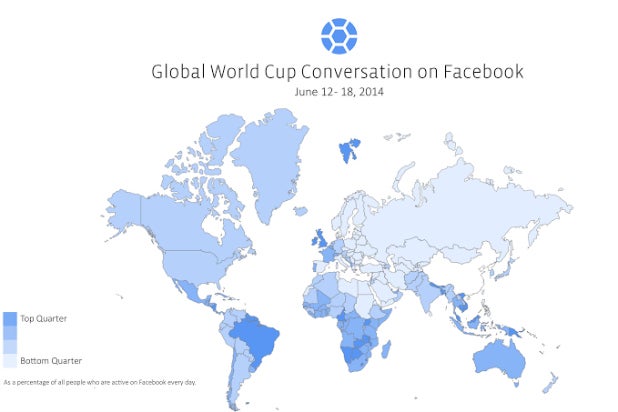 In just one week, more users have discussed the World Cup on Facebook than the number of people who talked about this year’s Super Bowl, Oscars and Sochi Games combined. It’s already a record for a single event on the social media giant, and it still has three more weeks of matches to come.

Of course, the Super Bowl and Academy Awards cover just a few hours, while the Sochi Games is a weeks-long competition.

Thus far, the World Cup has scored 274 million more viewers than the most recent Super Bowl, 339 million more than the Olympics and bested the Oscars by 434 million. Here’s the full breakdown comparing the soccer tournament to other major 2014 events:

Facebook’s data team also looked at where people around the world are having their conversations. The following list is based on the number of people talking about the World Cup so far, weighted for the size of the Facebook population in each country (meaning the number of daily active people):

A shaded map depicting the results is at the top of this post.