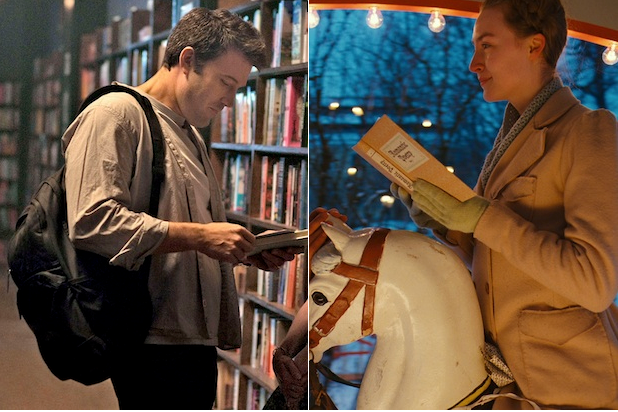 “The Imitation Game,” “The Grand Budapest Hotel,” “Gone Girl” and “Boyhood” are among the nominees for the Writers Guild of America’s best screenplays of 2014, the WGA announced on Wednesday.

The nominees did not include Ava DuVernay’s “Selma,” which was notably left out of Monday’s Producers Guild nominations – but this time the omission was expected, because the film was not eligible under WGA rules that limit its awards to scripts written by members or produced under the Guild’s Minimum Basic Agreement.

“Birdman” and “The Theory of Everything,” two more likely Oscar nominees, were also ineligible, as was Mike Leigh’s “Mr. Turner.”

In the Original Screenplay category, nominees were “Boyhood,” “Foxcatcher,” “The Grand Budapest Hotel,” “Nightcrawler” and “Whiplash.”

The Adapted Screenplay nominees were “American Sniper,” “Gone Girl,” “The Imitation Game,” “Wild” and “Guardians of the Galaxy.”

That last film was the biggest surprise among the nominees, although the adapted category is considered thin this year, particularly with the WGA’s disqualification of “The Theory of Everything.”

The Academy’s Writers Branch has broken with the WGA and classified “Whiplash” as an adapted screenplay rather than an original screenplay, beefing up the Oscar category a little further.

Overall, the nominations went as expected, showing that “Nightcrawler,” “American Sniper” and “Gone Girl” all have strong support among Hollywood guilds. “The Grand Budapest Hotel” and “The Imitation Game” kept their perfect streaks alive, and have now been nominated by all seven guilds or professional societies that have announced.

Eligible but missing from the nominees in the adapted category were “Inherent Vice” and “Into the Woods,” while the original category didn’t include “A Most Violent Year” and “Big Eyes,” among others.

Because of the WGA’s eligibility rules, its nominations don’t align as closely with Oscar nominations as do most guilds. In the past five years, about 60 percent of WGA nominees have gone on to receive Oscar nods.

“American Sniper,” Written by Jason Hall; Based on the book by Chris Kyle with Scott McEwen and Jim DeFelice; Warner Bros.

“Gone Girl,” Screenplay by Gillian Flynn; Based on her novel; 20th Century Fox

“Guardians of the Galaxy,” Written by James Gunn and Nicole Perlman; Based on the Marvel comic by Dan Abnett and Andy Lanning; Walt Disney Studios Motion Pictures

“The Imitation Game,” Written by Graham Moore; Based on the book Alan Turing: The Enigma by Andrew Hodges; The Weinstein Company

“Wild,” Screenplay by Nick Hornby; Based on the book by Cheryl Strayed; Fox Searchlight

“The Internet’s Own Boy: The Story of Aaron Swartz,” Written by Brian Knappenberger; FilmBuff