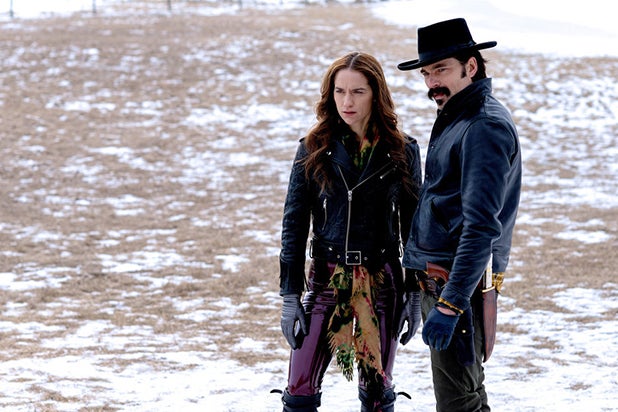 The fan-favorite “Wynonna Earp” will come to a series conclusion with the remaining six episodes of Season 4, Syfy announced Friday.

The remaining episodes will begin airing on Friday, March 5, with the series finale set for Friday, April 9.

“Wynonna Earp,” which debuted in 2016, stars Melanie Scrofano as the titular gunslinger, a descendant of the famed lawman Wyatt Earp cursed with the responsibility of defending the world from demons. The Emily Andras-created series has become a cult favorite across its troubled four-season run, with fans more than once rallying to prevent the show from cancellation.

“I’d like to thank our wonderful cast and crew, all of whom were instrumental in bringing ‘Wynonna Earp’ to our loyal and passionate audience,” Andras said in a statement. “We couldn’t be prouder of these last six episodes on SYFY, and are thrilled to share them with our beloved fans, who have changed our lives forever. I have been honored to tell Wynonna and her family’s story, and along with Seven24, Cineflix and CTV Sci-Fi, are hopeful we can continue to share their inspiring tales in the future.”

Season 4 premiered last year, overcoming delays caused by financing issues and the COVID-19 pandemic. At the time, Andras described the show in an interview with TheWrap as “a little bit blessed and a little bit cursed.”

“Every once in a while a show comes along with a powerful message that resonates beyond all expectations with its fans, and for SYFY that show has been ‘Wynonna Earp,'” said Frances Berwick, Chairman, Entertainment Networks. “We are so grateful to Emily Andras and her incredible team who brilliantly brought light to real issues around identity and sexuality throughout the series four-season run. From the very beginning, this show deeply connected with our viewers – reaching new fans every season, filling up Comic-Con theaters, securing write-in award nominations and even landing multiple fan-funded Times Square billboards. To our ‘Earpers,’ we are so proud to have shared such an incredible narrative with all of you. Thank you for your passion and thank you for taking this journey with us.”

“We are so proud of ‘Wynonna Earp’ and everyone involved with the show,” said Ezra Rosensaft, CEO, IDW. “We are grateful to SYFY for giving such a great run to such a special show. Emily’s incredible drive, the incredible team and the incredible fandom made being a supporting player on its four season journey a true honor.”