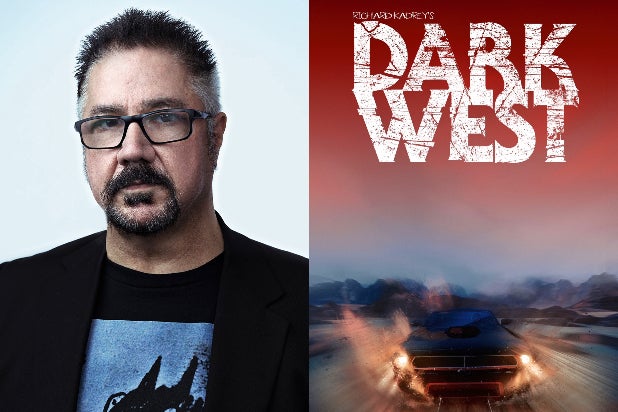 Richard Kadrey, author of the fantasy book series “Sandman Slim,” has written an original screenplay called “Dark West” that will be adapted into a movie by “Wyrmwood: Road of the Dead” writer-director Kiah Roache-Turner.

Chris Goldberg’s Winterlight Pictures has optioned “Dark West” and set Roache-Turner to write the next draft of the script. Roache-Turner is eyeing to direct the film in his native Australia. Kadrey is also working on turning “Dark West” into a graphic novel.

“Dark West” is a vampire revenge thriller set on the highways of Texas that follows two car thieves who accidentally T-bone a pair of vampires in the middle of the night. The story is in the vein of the classic ’80s horror films “The Hitcher” and Kathryn Bigelow’s “Near Dark.”

The idea for “Dark West” came about after Kadrey’s “Sandman Slim” book series was optioned by Goldberg in his role as EVP at Studio 8 and subsequently developed as a feature with Chad Stahelski (“John Wick”). Goldberg and his company Winterlight Pictures will produce the film in partnership with Australian producers See Pictures. Derek Warriner will serve as executive producer.

Kadrey will soon publish the final installment in his 12-book “Sandman Slim” series, which has landed on the New York Times Bestsellers list and tells the story of a gladiator who escapes from hell to seek revenge on those who killed his lover. Kadrey is also the author of the stand-alone novel “The Grand Dark,” and his 18 books have sold over a million copies in total. He’s also done comic book story arcs on “Lucifer” and “Hellblazer.”

Roache-Turner is the writer and director of the 2015 action film “Wyrmwood: Road of The Dead,” which earned cult fame following its premiere at Fantastic Fest. He released his second feature, “Nekrotronic,” in 2018 and is currently shooting his “Wyrmwood” follow-up, “Wyrmwood Apocalypse,” which is aiming for a 2021 release in Australia.

Goldberg spent a decade as a literary scout at Fox. After working at Studio 8, he launched Winterlight Pictures, and currently has projects set up at Netflix, Amazon, Showtime and others, including a feature adaptation of “The Maid” starring Florence Pugh at Universal and “Lush” at Lionsgate. Goldberg also sold his family’s story “Supermodel Snowpocalypse” to Paramount with Paul Feig attached, which is based on an article by “Pitch Perfect” writer Mickey Rapkin.

See Pictures is made up of producers Jamie Hilton, Michael Pontin, Isabel Stanfield and Cody Greenwood. They produced the adaptation of Tim Winton’s “Breath” as well as “Swinging Safari,” “Backtrack,” “Outlaws,” “Long Story Short” and more.

Richard Kadrey is represented by Curtis Brown Ltd, for publishing by Ginger Clark and for film and TV by Holly Frederick.