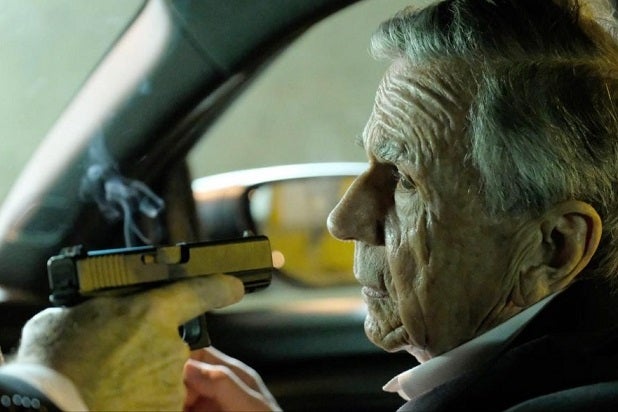 (Note: This post contains spoilers for the premiere episode of “The X-Files” Season 11.)

“The X-Files” has always been steeped in secret alien abductions, government conspiracies and mysterious secrets. The premiere episode of Season 11, “My Struggle III,” is full of references to the show’s lore and its main villain, the Smoking Man.

But in addition to a big retcon of the events at the end of Season 10, a number of twists and turns along the way, and a ton of new information about the decades-long conspiracies the show is known for, there’s another secret hidden in the episode.

Also Read: Fans React To That 'X-Files' Twist: 'Are You Kidding Me?'

At the close of the premiere, there’s a shot of a young man, presumably William, the son of Mulder (David Duchovny) and Scully (Gillian Anderson). William is obviously struggling, and as the music rises, it’s possible to hear what sound like strange, squeaky alien voices cutting through the other sounds. While the sounds themselves come off as the creepy, alien influence acting on William, it turns out they’re actually hiding a message.

If you reverse the sound of the voices and slow it down, it turns out that the alien speech is actually a digitally distorted human voice. We had trouble making it out, but Reddit user JordinGoff posted their results on YouTube, along with an interpretation that sounds pretty accurate based on our own manipulations of the audio.

According to JordinGoff, the message is: “If this is the end, it’s been a wild, wild adventure with some of the finest people I know and the greatest fans that we could’ve hoped for. Here’s to you. The truth is out there, 2018.”

Also Read: 'X-Files' Refresher: Who the Heck Is Jeffrey Spender?

Presumably the message comes from “The X-Files” creator Chris Carter, although the voice is distorted, which makes it tough to tell (although if you lower the pitch by about 50 percent, the message winds up sounding a lot more like Carter). With 9 original seasons and a two-season revival in the bag, it makes sense that Carter would take a chance to thank the fans that helped make it all possible.