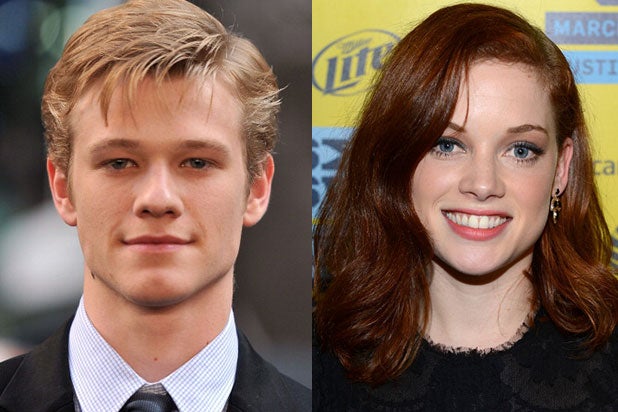 Lucas Till, who plays Havok in the “X-Men” franchise, and “Suburgatory” star Jane Levy are being eyed for the lead roles in Paramount’s big-budget “Monster Trucks” movie that the studio hopes will launch a “Transformers”-like franchise, multiple individuals familiar with the project have told TheWrap.

While Till and Levy are the top choices to star in “Monster Trucks,” they have no offers yet because the studio has not officially greenlit the movie, though it is scheduled for release on May 29, 2015. Production is expected to start this summer.

Paramount and representatives for Till and Levy had no comment.

Also read: Lucas Till Goes to War in ‘X-Men: Days of Future Past’ (Photo)

Based on the popular Hasbro toy line, “Monster Trucks” is described as a $100 million Amblin-type action/adventure movie that is a cross between “The Goonies” and “Transformers.”

Should they close deals, Till would play a bad boy with a good heart, while the character Levy would play is described as “what one might imagine Tina Fey was like in high school.”

Till’s fellow rising stars Dylan Minnette and Nick Robinson were also eyed for the lead in “Monster Trucks,” though they ultimately signed on to Sony’s “Goosebumps” and Universal’s “Jurassic World,” respectively.

“Monster Trucks” is currently scheduled for release on May 29, 2015 — a date it has to itself for now. The film is slated to compete with the second weekends of Brad Bird‘s Disney movie “Tomorrowland” and the Melissa McCarthy spy comedy “Susan Cooper,” while the following weekend will bring WB’s earthquake epic “San Andreas” and DreamWorks Animation’s “B.O.O.: Bureau of Otherworldly Operations.”

Till has been poised for stardom ever since he was cast as Havok in Matthew Vaughn’s “X-Men: First Class.” He reprises the superhero role in Bryan Singer‘s upcoming “X-Men: Days of Future Past.” Till next stars in a trio of genre movies — David Hayter’s “Wolves,” Dimension’s horror movie “Random” and the Bret Easton Ellis-scripted thriller “The Curse of Downer’s Grove.” He’s repped by APA, WCM and attorney Howard Fishman.

Levy starred in the “Evil Dead” remake and had a scene-stealing role in Paramount’s teen comedy “Fun Size.” She’ll soon be seen alongside Aubrey Plaza in the college reunion movie “About Alex,” and she also co-stars in the indie comedy “Frank & Cindy.” She’s repped by WME and the Burstein Company.