Bryan Singer directed three of the first five “X-Men” movies, not counting the Wolverine or Deadpool spin-offs. His work in the series has been, at the very least, entertaining and exciting, and at its best (2003’s “X2”), representative of the apex of the superhero genre. Singer’s take on the material has always put character and theme at the center, giving us interesting people grappling with issues that felt recognizable in the real world, and never at the expense of thrilling action or wildly imaginative set pieces.

With “X-Men: Apocalypse,” however, Singer seems to have acquired a new mutant power of his own: monotony. Whether it’s the lack of an interesting villain, or the fact that the series’ time-travel element is forcing these mutants to meet each other (and the audience) all over again for the first time, this latest entry marks a shocking letdown from Singer’s earlier contributions; what once soared now slogs.

The year is 1983, and cultists have discovered the remains of an all-powerful being known as Apocalypse (Oscar Isaac), whom the ancient Egyptians revered as a god, even though he’s really just mankind’s original mutant, able to project his consciousness into the bodies of other mutants, absorbing their powers and youth each time. Enemies buried him under a pyramid, but now he’s back and ready to cleanse the world.

Meanwhile, Magneto/Erik Lensherr (Michael Fassbender) is hiding out in Poland, living anonymously (and pseudonymously) as a steel worker with a wife and young child. When he uses his powers to save a co-worker in an industrial accident, however, his cover is blown, which leads to tragic circumstances. The threat of Magneto’s vengeful return sends Mystique (Jennifer Lawrence), who has just rescued Nightcrawler (Kodi Smit-McPhee, “Slow West”) from underground mutant fights in Germany, back to upstate New York and the school run by Professor Xavier (James McAvoy). 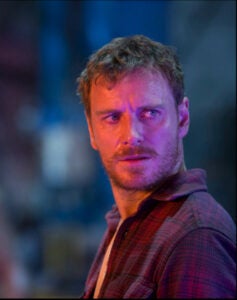 Meanwhile — there’s a lot of “meanwhile” in this movie — Scott Summers (Tye Sheridan, “Mud”) comes to the academy to learn to control his eyebeams, and he befriends telepath Jean Grey (Sophie Turner, “Game of Thrones”), who’s having nightmarish premonitions, perhaps about her own powers or about the endgame of Apocalypse, who’s busy recruiting his Four Horsemen: Magneto, Storm (Alexandra Shipp, “Straight Outta Compton”), Angel (Ben Hardy, “EastEnders”) and Psylocke (Olivia Munn).

And if that summary sounds overstuffed, it doesn’t even include Hank McCoy/Beast (Nicholas Hoult), who’s teaching at Xavier’s school while keeping his blue fur at bay, or CIA agent Moira MacTaggert (Rose Byrne) discovering the emergence of Apocalypse while not remembering the events of “X-Men: First Class” after Xavier wiped her memory, or the return of speedster Quicksilver (Evan Peters), who still hasn’t told Magneto that he’s his dad, or the inevitable appearance of Wolverine (Hugh Jackman).

Where “Apocalypse” falls apart is with its titular villain: He’s generically evil, setting out essentially to destroy everyone and everything on the planet, a plan that’s not only difficult to take seriously but also gives screenwriter Simon Kinberg (“Fantastic Four”) no metaphorical meat. Previous “X-Men” installments used the mutants and their struggles to comment on everything from the civil rights movement to coming-out in the LGBT community, but all we can take from this film is standard-issue superhero battles.

Those skirmishes are perfectly fine, granted, but they don’t amount to much since the bad guy is such a blank and since we never feel that Apocalypse is going to succeed; you’ll find more genuine stakes in “The Angry Birds Movie.” Even the film’s action centerpiece — Quicksilver rescuing everyone from an exploding building in cheeky slo-mo — feels like an exact copy of a better sequence from “Days of Future Past.”

You have to wonder what kind of extraordinary drama or comedy — or heck, even superhero adventure — that Singer could make with this impressive ensemble, but no one gets much of a chance to make an impression, good or bad, with the exception of Turner, who’s overly subdued, and Olivia Munn.

What’s Munn’s reward for three impressive seasons on HBO’s “The Newsroom”? A costume that’s more appropriate for a cosplay fetish ball than for combat. There’s that joke about yellow spandex that Wolverine makes in the first “X-Men” movie, the one that underscores the fact that outfits that work on paper don’t necessarily translate to film, and one wishes that Psylocke’s ninja-stripper get-up had received similar consideration.

Singer’s regular composer John Ottman works overtime to make us feel that exciting, important things are happening, but the movie never delivers them. “X-Men: Apocalypse” provides a hint at what might one day take down the ubiquitous superhero genre: utter dullness. For all its bangs, the movie is ultimately a whimper.

Who from the cast of ”Captain America: Civil War“ enters the pantheon of comic book movie greats?

Some feel Zach Snyder's only truly superpowered hero should have had a booming voice, but Crudup's diminished delivery shows how the character's humanity has faded as his powers increasingly distance him from everyone around him.
View In Gallery