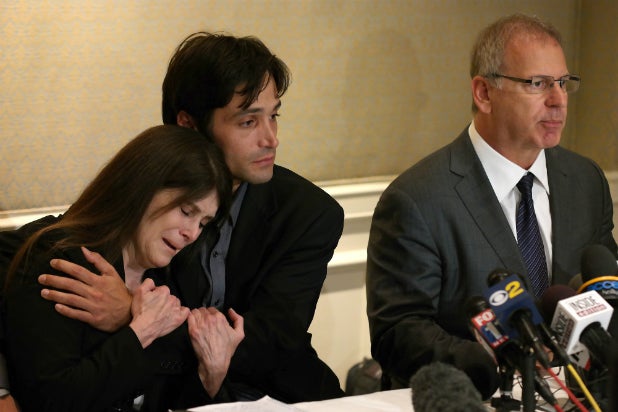 Garth Ancier, David Neuman and Gary Goddard have been named as defendants in three more lawsuits brought by Michael Egan, the former model and actor who last week filed a separate suit accusing “X-Men” director Bryan Singer of sexual abuse when he was a minor.

The three men named in the lawsuits have long histories in the entertainment industry. Ancier is a television executive who formerly ran programming at Fox, the WB, and BBC Worldwide America. Neuman is a former President of Walt Disney Television and a vice president of comedy development at NBC and Goddard is a Broadway producer.

The additional lawsuits, all filed by lawyer Jeff Herman in U.S. District Court in Hawaii, build a picture of an alleged Hollywood sex ring targeting underage boys, of which Egan says he was a victim in the late 1990s.

Herman revealed the names during a news conference Monday afternoon at the Four Seasons Hotel in Beverly Hills.

During the gathering, accuser Michael Egan’s mother sat next to him and cried. “I’m very proud of him, very proud of him,” Bonnie Mound  said tearfully, referring to Michael’s decision to go public with the allegations.

The three executives named in lawsuits Monday each face charges of assault, battery, intentional infliction of emotional distress, and invasion of privacy by unreasonable intrusion.

Goddard is accused of initiating sexual abuse of Egan through a process known as grooming — which makes sex abuse victims feel comfortable with and trust their abusers. He is alleged to have made promises that he would further Egan’s acting career.

Within approximately two to three months of the beginning of the sexual exploitation of Plaintiff at the M & C Estate, Defendant Goddard initiated his sexual abuse of Plaintiff. He groomed Plaintiff for the sexual abuse that Plaintiff ultimately endured at his hand by offering acting advice to Plaintiff and causing Plaintiff to believe that he would refer him for auditions for acting and modeling projects.

Goddard’s attorney, Alan Grodin, told TheWrap that his client is out of the country and has yet to see the complaint but denies the allegations.

“Gary Goddard is out of the country and we have not seen the complaint,” Grodin said in a statement. “Based on what we have heard, the allegations are without merit. Once we have seen the complaint we will respond appropriately.”

Ancier allegedly began abusing Egan when the then aspiring actor was 15 years old at a mansion in Encino, Calif. called M & C Estate, and continued the behavior during trips to the Paul Mitchell Estate in Kailua, Hawaii.

The complaint against Ancier further suggests that there were multiple adult males who were abusing other boys on the Hawaii trips and that Egan at the time tried to avoid the situation but was allegedly persuaded by Ancier, who lured him into unwanted sexual contact.

During the evening of the first day of the second of the above-referenced trips to Hawaii, Plaintiff was sexually abused by another adult at the Estate. Plaintiff was aware that other teenagers were being sexually abused or assaulted by other adults. In an attempt to avoid the depravity occurring around him, Plaintiff went to the swimming pool area with the intent to sleep outdoors. Defendant Ancier located him there and escorted Plaintiff to his bedroom in order for Plaintiff to sleep with him.

Plaintiff went to take a shower and Defendant Ancier followed him into it and
forcibly and nonconsensually sodomized Plaintiff.

Neuman is also accused of abusing Egan starting at the age of 15 in California and Hawaii and promising to further Egan’s career.

Defendant Neuman often told Plaintiff that he would find a role for him in television shows, and that he would use his connections to further Plaintiff’s acting career.

Defendant Neuman sexually assaulted Plaintiff on numerous occasions at the M & C Estate during the one to two year time period preceding the trips to Hawaii … Those unwanted sexual acts included sodomy, oral copulation, and fondling of genitals. Plaintiff was approximately 15 years old when Defendant Neuman began sexually abusing and exploiting him in California.

All of the suits claim that the sexual contact was always unwanted and that Egan and other boys were sometimes plied with mind-altering drugs and alcohol to get them to comply.

Meantime, Bryan Singer‘s lawyer, Marty Singer, vehemently denies the allegations against his client, which were filed without notice to the director on Wednesday. “The claims made today about Bryan Singer are completely fabricated,” Marty Singer said in a statement following Herman and Egan’s earlier press conference on Thursday, calling the suit “absurd and defamatory.”

Herman fired back at the attorney’s statements and actions in Monday’s press conference.

“In this case it’s interesting because immediately the case that I filed last week against Bryan Singer, his lawyer stated that the claims were fabricated,” Herman said. “I find that to be an unusual statement for a lawyer, because as lawyers we are not witnesses to the events and to make a statement that claims are fabricated before he’s taken a deposition, before he’s looked at any evidence we have, is a bit surprising to me.

“But beyond that is that the statements were made that there will be a lawsuit filed against me and my client for malicious prosecution and for defamation. The reason that lawyers who represent defendants say that in my opinion is to chill other victims from coming forward. It’s to scare and intimidate the plaintiff like Mike and lawyers.”

The suits were all filed in federal court in Hawaii due to the state’s temporary suspension of the statute of limitations in child sex abuse claims, which expires on Thursday. Much of the alleged abuse took place during two trips to Hawaii in 1999.

Egan had filed a suit in 2000 against Marc Collins-Rector and Chad Shackley, who supposedly lived at M & C Estate in California, where Singer and others attended parties, where underage boys were allegedly passed around for sex with the older men. Singer was not named in that lawsuit.

Representatives for Ancier and Neuman did not immediately respond to TheWrap’s request for comment.

Pamela Chelin and Anita Bennett contributed to this report.