Journalist Yamiche Alcindor is heading to NBC News and MSNBC to serve as a Washington correspondent, but she won’t be leaving her role as host of PBS’ “Washington Week.” She will join in March and will cover not only President Joe Biden’s administration, but the impact of federal policies on various communities around the United States, as well as issues at the intersection of race, culture and politics.

“I am so excited to join @NBC & @MSNBC as a Washington correspondent. This feels like coming home to family,” she tweeted Tuesday. “Covering the [White House] for @NewsHour has been an honor. I hope our @PBS viewers will keep watching @WashingtonWeek as I continue moderating that show.”

Ken Strickland, NBC News Senior Vice President and Washington bureau chief, made the announcement to staff on Tuesday, pointing out that Alcindor has been a network contributor since 2016 and has appeared on “Meet the Press with Chuck Todd,” “Morning Joe,” “Deadline: White House” and “Andrea Mitchell Reports, among others. 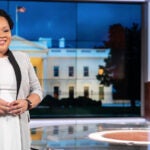 Alcindor has worked at the New York Times and USA Today. She is a Society of Professional Journalism Fellow and her work has been heavily awarded, including by the Radio Television Digital News Association and the International Women’s Media Foundation. Last year, she was named Journalist of the Year by the National Association of Black Journalists.

In an interview with TheWrap earlier this year, Alcindor celebrated “Washington Week” as a platform that allows her to bring her “whole self” to her reporting. Among her strengths, she pointed to her emotional sensibilities and the fact that her eyes still well up during coverage sometimes. She said hopes she’s doing a service in representation, too, by being someone others can connect to as “this millennial Black woman with curly hair and a Haitian background.”