A week after announcing that the domestic theatrical market would push past $10 billion for the first time in 2009, and end the year at around $10.4 billion, industry tracker Hollywood.com Thursday revised its count to an astounding $10.6 billion.

That puts the box office at a 10% increase over the 2008 total of $9.6 billion, which includes a nearly 6 percent increase in the number of tickets sold.That’s the largest jump since 2002, when the tally rose 11 percent. 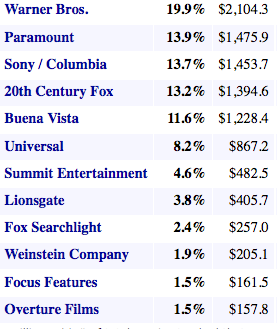 As notable, that’s a calendar-year figure, meaning the counting stops today. Adhering to a different 52 week calendar, studio distributors are actually counting this weekend (Jan. 1-3) on the 2009 books, at least domestically, so who knows how high the ultimate 2009 will end up, given the heat of “Avatar,” “Sherlock Holmes” and “Alvin and the Chipmunks: The Squeakquel.”

According to Hollywood.com, the last week of the calendar year will conclude with nearly $500 million in domestic revenue, by far the biggest week ever at the North American box office. (See studio market share at left, courtesy boxofficemojo.com.)

The trade noted that only three of the top 10 grossing films in the North America — “The Hangover,” “Star Trek” and “Monsters vs. Aliens” — failed to take in more money abroad.

With the global box office estimated at well over $21 billion this year, one has to only look back to 2004 for a good case of whiplash.

That year, the domestic DVD market peaked at $24.9 billion, according to research firm the Digital Entertainment Group, while — despite a then-record $8.5 billion year at the foreign box office — global theatrical revenue only stood at $14.7 billion.

Some pundits at that time were openly speculating the demise of the theatrical window, with movie premieres shifting away from the multiplex to the shelves of Best Buy and Wal-Mart.

However, overall home entertainment revenue in 2009 is expected to be off significantly from the $22.4 billion the DEG reported for 2008 — a third straight year of decline.

While few are forecasting the end of the theatrical experience these days, things may be perking up a bit on the home entertainment front, with industry trade Home Media Retailing reporting that Christmas week sales of DVD and Blu-ray were up over 20 percent year-to-year to $622.4 million.