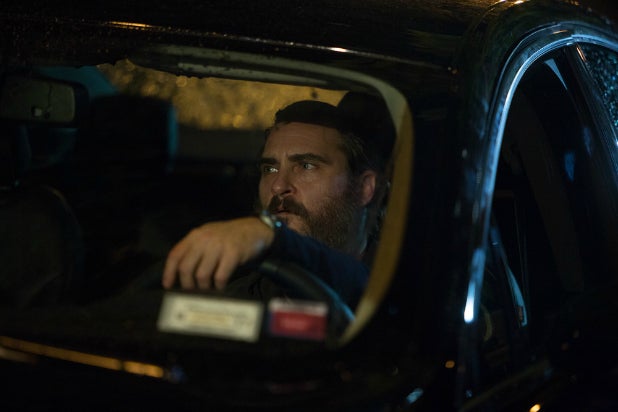 At this point, the winkingly irreverent shaggy-dog potboiler is as firmly established a genre as the hard-boiled stories it tries to subvert. Robert Altman kicked things off with 1973’s “The Long Goodbye,” his riff on a bewildered Philip Marlowe in the Age of Aquarius, and the Coens later took that baton and ran it up to summit of Cult Film Mountain with “The Big Lebowski,” leaving plenty of imitators trailing behind and inspiring plenty more in the two decades since.

So what’s a 2018 release to do? How can one further twist and turn the hardboiled-detective genre in a world where The Dude reigns and abides?

Scottish director Lynne Ramsay (“We Need to Talk About Kevin”) offers that question her elliptical and brutal answer in “You Were Never Really Here,” a film that presents an unfamiliar spin on this well-known style and does so with equal parts surgical precision and Mack Truck force. Still, for all of its meticulous construction and often masterful craft, the film remains something to coldly admire rather than easily embrace, often playing more as a collection of accomplished filmmaking moments than as a fully enthralling whole.

Adapting Jonathan Ames’ 2013 novella, that was itself a sideways riff on noir-ish detective fiction, writer-director Ramsay picks up that genre-slanting approach and moves it even further afield. Instead of subverting hard-boiled structure — where a jaded old-timer accepts a seemingly open-and-shut case, only to be ensnared in a wider web of corruption — “You Were Never Really Here” readily adopts it, but tells that recognizable tale with terse abstraction tied to the lead character’s fractured point-of-view.

That is to say, if you’re trying to make sense of the story, which is both clear-cut and oblique, you’re entirely missing the point. It doesn’t matter that hired muscle Joe (Joaquin Phoenix, in leonine bearded majesty) uncovers a wider ring of corruption and pedophilia when sent to rescue the missing daughter of a New York State Senator. What matters is that this hirsute veteran is mentally and physically scarred, that he — our unreliable narrator — suffers from a debilitating case of PTSD forged from a childhood of abuse and a career witnessing horrors in the military and FBI.

Also Read: Would Joaquin Phoenix Play The Joker? 'It Depends,' He Says

His trauma, and self-obliterating response to said trauma, frames his every waking moment. Under Ramsay and editor Joe Bini’s tightly coiled assembly, those same pathologies also shape the film’s form, so that the narrative content of any given interaction takes a backseat to the anguished mental landscape of the protagonist experiencing it. So really, it makes no difference if Joe is in a drug den or a diner, he lives each instant with the same twinging unease — and so too will the viewer.

(The version of this film currently opening in U.S. theaters is, incidentally, slightly expanded from the one that premiered at the 2017 Cannes Film Festival.)

While other film noir riffs might lob an unconventional cast of characters (as did the Coens) or employ cultural anachronisms (as did Altman) in order to shake things up, here the plot moves through the familiar film-noir motions while using film craft to effectively blur them out. Discordant flashbacks and flash-forwards, cut like synapses firing and set to Radiohead guitarist Jonny Greenwood’s warping, nervous score, become the focal point of any given scene.

Indeed, the film’s jangly, jagged-edge rhythm becomes its very narrative backbone. In that sense, the film is less interested in goofing on the detective genre than it is in undermining the genre itself; Joe could just as well be sleepwalking through a sweeping MGM musical or a light romantic comedy, and he’d experience the situations the same way.

Ramsay runs with that idea, often finding a number of unfamiliar notes to play in a series of otherwise common set-ups. In one standout sequence, after Joe realizes that a man he shot is not yet dead, he offers the expiring man a painkiller, and then gets alongside his victim on the ground. The two men then quietly listen to the pop music playing on the radio while one of them bleeds his life away.

Though such notes of grace make “You Were Never Really Here” stand out, they are few and far between in what is an otherwise grimly violent and willfully oblique tour through one fellow’s harrowed psyche. That the film can so quickly and so effectively establish Joe’s frenzied demons and numbed emotions is an absolute testament to the care and quality of filmmaking at hand. That the film leads you onto such stormy waters so quickly, and then lets the tempest roar without much reprieve for the next 90 minutes, means that for others, such an uncompromising and unvarying approach might offer little beyond the sum of its parts.