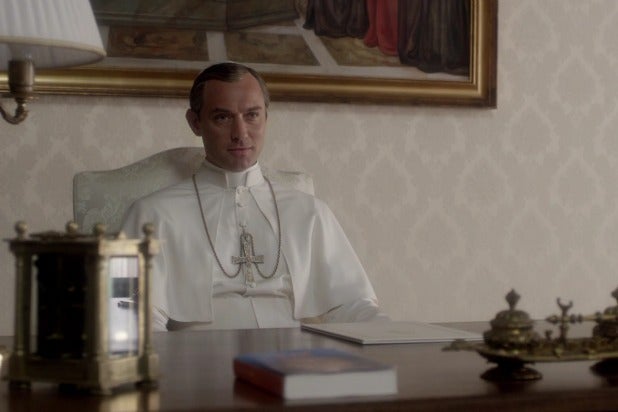 (Very light spoilers for HBO’s limited series “The Young Pope” are below.)

In the first episode of “The Young Pope,” Lenny Belardo (Jude Law), aka the newly elected Pope Pius XIII, gets acquainted with his new digs in Vatican City, with Cardinal Voiello (Sylvio Orlando) as his guide.

When showing the young pope his office and where he’ll hold meetings with other church officials, Voiella draws his attention to an advanced feature of the pope’s desk: a buzzer on its underside that he can use to cut meetings short. The buzzer calls in his assistant, who will enter the room and make an excuse as to why the pope is needed elsewhere.

In “The Young Pope,” the buzzer is a great source of comedy because Pope Pius XIII doesn’t bother with subtleties when he uses it. It’s obvious what he’s doing to those he wants to dismiss, and the awkward silences are deliciously excruciating. It’s so effective a joke that it would be easy to imagine that it’s a fictional flourish from series creator Paolo Sorrentino.

However, the pope’s secret desk buzzer is fact and not fiction. Or, at least, it was real at some point.

The buzzer is mentioned in David Kertzer’s Pulitzer-winning biography of Pope Pius XI, “The Pope and Mussolini: The Secret History of Pius XI and the Rise of Fascism in Europe,” during a description of a 1936 meeting with a German ambassador.

Pius XI ranted at the ambassador about the Nazi regime’s attempts to curtail the influence of the Catholic Church in Germany, not letting the ambassador get a word in edgewise. And then Pius used the buzzer as the punctuation mark for the one-sided conversation. Here’s the relevant excerpt:

Shouting and waving his arms and becoming ever more agitated, Pius bemoaned allt he ways the Third Reich was persecuting the Church. When Bergen attempted to get a word in, the indignant pope simply raised his voice further. The allotted ten minutes had long since gone by, yet the pope railed on. There have always been those who have said that the Church is destined to disappear,” he warned the ambassador. “But it is they who have always disappeared, not the Church.” Then the pope pressed the electric buzzer he had had installed on his desk, beckoning the attendant outside to open the door for his departing visitor.

So, there you have it. Pope Pius XI had the buzzer put in — though whether it’s used the way it is on “The Young Pope” or if succeeding popes removed the buzzer, or the desk, for that matter. Either way, I’m not complaining.

There have been a lot of popes over the past two millennia, and it wasn’t all fun and games

HBO's "The Young Pope" is here, but Lenny Belardo is actually a pretty tame papal in historical context of the most important religious figure in the world.