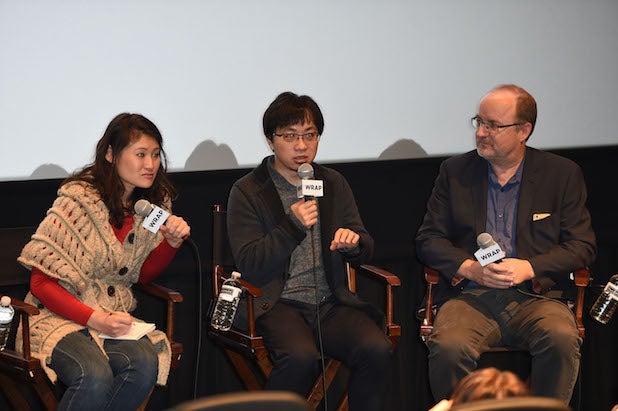 “Your Name” director Makoto Shinkai says he always gets nervous standing in front of a crowd that’s just seen one of his films, but at Monday’s screening of his latest film for The Wrap Screening Series he seemed especially surprised to be appearing before an American audience.

“I’m almost in shock that I’m here at this moment,” Shinkai said in a panel discussion moderated by TheWrap Awards Editor Steve Pond.

“Your Name” arrived stateside after experiencing a surge of box office success in Japan and China alike, this week surpassing Hayao Miyazaki’s “Howl’s Moving Castle” to become the second-highest grossing animated film in Japanese history, behind only “Spirited Away.” It even won Best Animated Film honors from the Los Angeles Film Critics Association, making it an Oscar contender in a crowded Best Animated Feature race.

Also Read: 'Snowtime!' Creators on How They Captured the Elements of Winter, Childhood and Conflict

Of course, “Your Name” is all about unexpected meetings and circumstances. The film tells the supernatural love story of two teenagers who have never met but find themselves uncontrollably swapping bodies and lives day to day. The more they live in the other’s shoes, the more they grow to care for the other.

Pond pointed out during the panel discussion America’s rich history of atrocious body-swapping films, to which Shinkai replied that it’s an even more theme among Japanese manga comics. He wanted to avoid the predictability of un-swapping bodies, and the film utilizes a series of twists and plays on audience expectations that give “Your Name” fresh meaning.

“I wanted to keep it unpredictable and keep everyone on their toes,” Shinkai said.

“Your Name” first arrived as a novel prior to its cinematic release, and the book’s best-seller status helped fuel its box office success. But Shinkai was working on the novelization of the story while well into production of the film. He personally spent six months storyboarding, turning the whole film around in roughly two years. That may be fast by U.S. standards, but Shinkai says an inability to work quicker hinders his creative process.

“As soon as I have the idea, I need to create as quickly as possible, because it’s what’s going on in society, and that’s what connects me to my audience,” Shinkai said. “I really wish it would only take two hours to make a two-hour movie.”

“Your Name” is in limited release now.