All male heroes in teen sex comedies, whether it’s a dopey movie or a smart one, are driven by a single ruling imperative: to get laid. And so it is with Nick Twisp (Michael Cera), the bright and hyper-verbal protagonist in "Youth in Revolt," an appealing little comedy from talented director Michael Arteta ("The Good Girl" and "Chuck & Buck"). 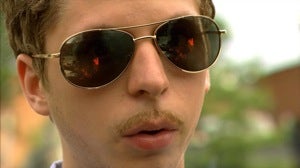 If "Youth" were only about sex and Nick’s desire to score, it would be just another in the long line of overheated "Porky’s" wannabes that Hollywood has been turning out so enthusiastically for years. Been there, seen that, really don’t want to see it again.

Based on a novel by C.D. Payne, "Youth" is a charmingly picaresque tale that moves along at a sprightly pace. Nick, who at 16 is already the intellectual superior of both of his divorced parents (Jean Smart and Steve Buscemi, always welcome faces), spends much of the movie lusting after, and conspiring to attract, the beguiling girl (Portia Doubleday) living nearby.

When she confesses to a fondness for all things French, he invents, at least in his head, a suave, cigarette puffing, sexually predatory, Gallic alter ego named Francois (also played by Cera). This slinky stud nonchalantly tosses off such come-on lines as, “I want to tickle your belly button—from the inside” and goads Nick into getting into all sorts of trouble.

It is Francois who gives "Youth" its kick — and offers Cera a break from portraying yet another shy, brainy nerd. In his gauzy blue shirt, tight white pants and neck scarves, this sleepy-eyed icon of Continental cool is a delicious throwback to the beautiful young men who populated New Wave French cinema of the late ’50s and early ’60s (think Jean-Paul Belmondo and Alain Delon).

He is everything that’s sophisticated and foreign and exotic and all that goes with it — namely sex.

If you’re a virginal teenager who’s smart and well read enough to long for a world beyond the mall and the high-school cafeteria where the jocks pick on you (as they do to Nick here), well, that’s mighty alluring.

In a world where "Twilight" rules, there should be a small place for smart teen movies like this one to thrive. It lets adolescents know it’s okay to dream, to yearn, to reach for something beyond the borders of your hometown and your peers and parents’ intellectual limitations.

And, by extension, it reminds adults who may have already done all those things just how awkward, painful and difficult  it was to escape, and how worth it.

What Nick goes through is painful and at times boneheaded, but it’s also admirable and funny. And isn’t adolescence that way? It’s hell while you’re there, but later you’ll look back at it fondly, knowing you couldn’t have gotten to where you are today without at least some of that suffering and stupidity.

Well, maybe not the acne.

One doesn’t want to oversell "Youth." As an adult viewer, you’ll start checking your watch at the hour mark (there’s still 30 minutes left). But, as teen sex comedies go, this one is clever, well-cast and well-acted, and has more on its mind than simply exploring how many different ways it can drench a busty nymphette’s T-shirt.

Bonus points: If "Youth" encourages teenage viewers to make like Nick in an early scene and rent a DVD copy of "La Strada," Federico Fellini’s 1954 masterpiece, the film will have done a major service to budding cineastes, however hormonally preoccupied, everywhere.