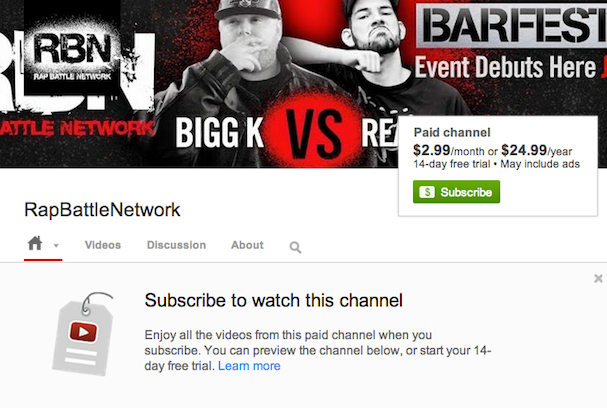 Alchemy Networks CEO Peter Griffith was one of the first media executives to bet YouTube viewers would pay to access certain channels. His company was one of the YouTube’s initial partners when it debuted subscription channels in May, launching a network dedicated to videos of rap battles.

Even at the time, Griffith acknowledged that he wasn’t sure if it would work.

“Most of us are not happy with the numbers we’ve seen,” Griffith told TheWrap, lamenting that the program was “too early” and that there were a lot of kinks for YouTube to work out.

Also read: Can a Little-Known YouTube Show Make It on TV? ‘BRKDWN’ Will Find Out

Chief among them is the inability to subscribe from mobile phones.

“70 percent of our audience is very active using YouTube on mobile phones,” Griffith said. But YouTube made it so that audience could only subscribe from a computer.

“It’s a frustrating experience for the user,” Griffith said.

A YouTube spokeswoman pointed out that the paid subscription program is still in the pilot phase.

“We’re always looking for ways to meet our creators and viewers needs better, and we’re still in early days with paid channels,” the spokeswoman said. “Just as the Partner Program empowered creators to build great channels over the last six years, we look forward to seeing how they use this additional way to build an audience on YouTube.”

Griffith remains grateful to YouTube, which gave him funding for one of his first channels. That has now spawned a TV show, and Alchemy will keep making shows for the web.

Yet there’s a reason he’s turning to TV for money.

YouTube subscriptions are “still a long way off from being a viable business model.”