As “Tomorrowland” attempted to remind us earlier this summer, our society has gotten so obsessed with contemplating our demise that we’ve stopped thinking optimistically about the future. That’s not entirely true, however: “Z for Zachariah,” for instance, takes place following a devastating apocalypse, but it’s far more concerned with what comes next than with how we got there in the first place.

Adapted by Nissar Modi from the novel by Robert O’Brien — and borrowing at least the basic premise from the old Harry Belafonte movie “The World, The Flesh and The Devil” — “Zacharaiah” suggests that both the best and the worst of humanity will find a way to survive if and when we ever get to reboot society. There is hope and there is despair, and like the characters themselves, we are left to contemplate the role of each and to wonder which will prevail.

After an undescribed catastrophe, Ann (Margot Robbie) lives alone high in the mountains, in one of the few areas not devastated by radiation. (Her father and brother set off to find survivors and have yet to return.) Her solitary existence is disrupted by the sudden, surprising arrival of Loomis (Chiwetel Ejiofor), a scientist who left his underground bunker with an anti-radiation suit in the hopes of finding breathable air and potable water.

So thrilled is he to find Ann’s little corner of the world, in fact, that he foolishly goes swimming under a waterfall that’s bringing in radioactive water from outside the valley. Ann rescues him and nurses him back to health, and soon he’s well enough to help out around the farm, using his ingenuity in various ways, including manually pumping fuel from a nearby gas station to power up Ann’s tractor. 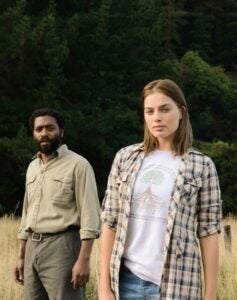 Despite their differences — she’s a devout Christian, he’s a logic-based non-believer — the two begin to grow close, and not only because they are (as far as they know) literally the last people on earth. Their contrasting points of view come into conflict when he suggests dismantling her father’s church to build a wheel that would turn that toxic waterfall into a hydroelectric plant for the farmhouse’s electricity.

And then Caleb (Chris Pine) enters the picture. A miner who survived the event by remaining deep inside a cave, he is now making his way through the wilderness in the hopes of finding an outpost of civilization he heard about before his radio died. Loomis is immediately suspicious, but the generous Ann invites him to stay for a while.

“Z for Zachariah” — an impressive follow-up for director Craig Zobel, after his acclaimed and controversial “Compliance” — never makes it entirely clear whether Caleb is merely a fellow victim of circumstance or the snake in Loomis’ Garden of Eden. (The film’s title comes from “A is for Adam,” a Bible-based primer Loomis finds in Ann’s library.)

See Video: 'Z for Zachariah' Stars Chris Pine, Margot Robbie on How They Interpreted Their Characters

The relationship between Ann and Loomis has already been complex and delicate, and the addition of Caleb only deepens the intrigue. What’s the right thing to do? Can these beggars be choosers, romantically speaking? And will mankind’s most base instincts rear their head among people who are supposedly devoted to the betterment of humanity, whether through Jesus or through science?

Much credit is due for making Ann one of the most complex and interesting devout Christian characters in American cinema for some time. After all those awful movies from Kirk Cameron and the “God’s Not Dead” crew, in which the devout are stiffly saintly while non-believers are treacherous monsters, here’s a Christian who registers as a human being, and the film never diminishes her concerns or her beliefs.

With a cast of just three, everyone gets their share of heavy lifting, and all the performers make the most of the opportunity. Ejiofor often communicates far more with his eyes than he’s saying with his elliptical dialogue, Pine keeps us guessing as to Caleb’s motivations while ingratiating himself with both of the other characters, and Robbie plays a backwoods gal so effectively that it’s hard to reconcile her as the same actress who so brilliantly played a grasping one-percenter in “The Wolf of Wall Street.”

Cinematographer Tim Orr, a frequent David Gordon Green collaborator, turns the lush valley into a verdant paradise on earth, with even that deadly waterfall looking like something out of a soda commercial. His camera is just as adept at picking up the small details in both the set dressing (keep an eye on those water glasses) and the performances.

“Z for Zachariah” feels like a genuine rarity: an American movie that doesn’t tell you what to think or how to feel when the credits start rolling. Contemplating our doom doesn’t seem like a bad idea when it’s done this skillfully.