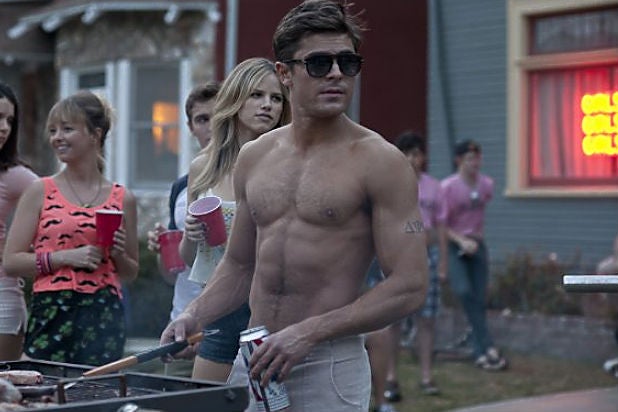 In “Neighbors,” an irreverent comedy directed by Nick Stoller, Efron continues his transition from teen idol to mature actor — with a big push from Seth Rogen and Rose Byrne. Efron plays Rogen’s neighbor, the president of a fraternity hellbent on making history by throwing the greatest party his college town has ever seen. He’s more than a just Rogen’s co-star, he’s the comedic foil to Rogen, one of the most successful comedy writers and actors of the past decade.

“These actors that grow up through the Disney system have insane chops,” Stoller told TheWrap Saturday. “[Zac’s] very funny and knows what makes him funny. He’s not afraid to play the straight man and he has some of my favorite impov scenes.”

The movie drew a raucous applause after a “work in progress” cut of the film premiered Saturday night at South By Southwest. Though Rogen taunted a few members of the crowd, labeling one “self-serving,” Stoller deemed the festival “the best place to play a movie.” He was in Austin six years ago with the crowd-pleasing “Forgetting Sarah Marshall,” his directorial debut. That movie, which features a naked Jason Segel in an early scene, is tame compared to “Neighbors.” Rogen and Byrne play a married couple horrified by the arrival of a frat next door. Yet neither is ready to grow up — as in so many recent comedies — so they get caught up trying to fight their new enemy with juvenile hijinks.

The story was born when Brendan O’Brien’s wife described some youths in the neighborhood by telling a cop “I don’t’ know what they’re doing, but they’re up to no good.”

“We became old at that moment,” O’Brien, who co-wrote the movie with Andrew Jay Cohen, told the crowd.

The movie takes this concept to the extreme. During a friendly night of partying at the neighboring frat house, Rogen takes mushrooms and “crosses streams” with Efron — a bonding mechanism of sorts. Yet the relationship deteriorates from there as Efron and his buddies, including Dave Franco and Christopher Mintz-Plasse, exact retribution after Rogen and Byrne call the cops about a party. When Rogen retaliates by flooding the frat house with water, Efron devises a scheme to save it by having his brothers craft dildos from their own members and sell them. They get a hot tub out if it. All of these shenanigans are still tamer than the final party, which Stoller said was designed to be the “craziest party you’ve ever been at.”

The writer-director learned a lot about shooting party scenes from “Get Him to the Greek,” his follow-up to “Sarah Marshall” starring Jonah Hill and Russell Brand. “Neighbors” features numerous memorable performances from comedy mainstays Rogen, Ike Barinholtz and Franco, among others, but the two standouts are Byrne and Efron. Byrne plays a woman every bit as ferocious as her husband, defying the comedic trope of the controlling, bleating wife. She rejects Rogen when he tries to tell her she’s supposed to keep him in check. She even facilitates a fraternal betrayal by feeding shots to Efron’s girlfriend and Franco — and then kissing both of them. The next morning Rogen is obligated to milk Byrne’s inflated breasts.

“It was important to her that this character not be a nag in any way,” Stoller told TheWrap. “Usually the woman in these movies is not that fun. My movies have gone away from that. I’ve made the female characters as funny as the guys.”

Also read: Can Naked Zac Efron and ‘That Awkward Moment’ Revive Rom-Coms for the Sexting Age?

As for Efron, he’s been on a mission to erase the Disney stigma and demonstrate his versatility, whether by flirting with Nicole Kidman in “The Paperboy” or palling around with Miles Teller and Michael B. Jordan in “That Awkward Moment.” Kidman already peed on him in “The Paperboy,” but “Neighbors” takes the raunch to a new level. When an audience member asked him about the transition from Disney star to comedic foil, he gave the following reply, “When you get a call from Seth Rogen, you’re in a good spot.”