The HollyShorts Film Festival has added new films featuring “Star Trek” actor Zachary Quinto and comedy legend Dick Van Dyke to its lineup, which kicks off on August 5 at the Directors Guild Theater on Sunset Blvd.

The Quinto film, “HOSTAGE: A Love Story,” will screen as part of the opening night program for the 6th annual festival; a comedy about the unlikely bond between a hostage-taker and his victim, it was directed by Hank Nelken and written by Holt Bailey and Brian Steele. 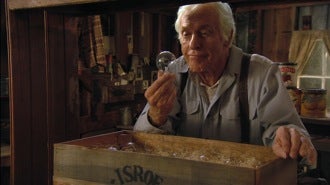 Van Dyke stars in “The Caretaker 3D” (right), a film directed by Sean Isroelit and written and produced by Jeffrey Amaral.  The film is set in 1930s Hollywood, with Van Dyke playing the man who maintains the thousands of light bulbs that illuminate the “HOLLYWOODLAND” sign.

“The Caretaker 3D” joins the previously-announced HollyShorts premiere of David Arquette’s short film “The Butler’s In Love,” which is also in 3D.

The full HollyShorts lineup will be announced in July.  More information is available at www.hollyshorts.com.