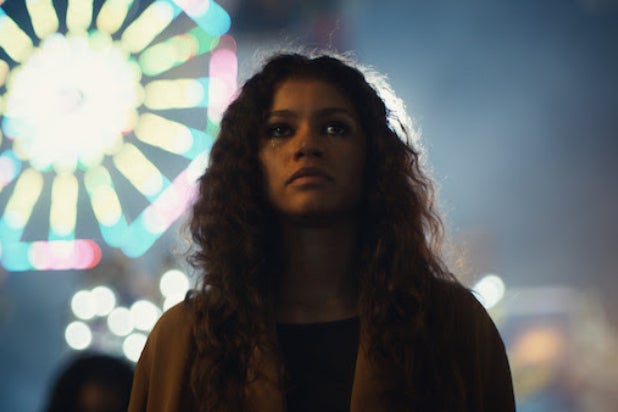 Zendaya became the youngest actress to win an Emmy for Outstanding Lead Actress in a Drama Series award at the 72nd annual Primetime Emmy Awards Sunday. The 24-year-old picked up her statuette — remotely, because these were the first-ever virtual Emmys — for her starring role as Rue in HBO’s “Euphoria.”

While Zendaya is the youngest performer to win a golden lady in the lead actress category, the youngest overall is actress Roxana Zal, who won in 1984 — when she was 14 years old — for her supporting role in the TV movie “Something About Amelia.”

And in 1977, Kristy McNichol won the Emmy for supporting actress in a drama series on her 15th birthday for the drama series “Family.” (She won again in that same category two years later.)

The first season of “Euphoria,” which premiered in June 2019, follows 17-year-old Rue Bennett (Zendaya), a drug addict fresh from rehab, who’s struggling to make sense of her future. Her life changes dramatically when she meets Jules Vaughn (Hunter Schafer), a girl who recently moved to town following her parents’ divorce, and like Rue is searching for where she belongs.

“Euphoria” was renewed for Season 2 a month after its premiere, but production on the new season was delayed this summer due to the coronavirus pandemic.

Last month, Zendaya said the team might make a standalone episode during quarantine that would serve as a “bridge” between the drama’s first and second seasons.

“We’re kind of trying to figure out how to eventually be able to create a Season 2 that we’re all really proud of and get all the best out of it that we want, but also still being very safe,” Zendaya told “Jimmy Kimmel Live!’ guest host Ben Platt in August.

“So we might end up doing like a little bridge episode. I don’t really know how to describe it,” she said. “Like an episode that we can do with a limited amount of people and in a safer environment that can kind of, I don’t know just give people something. Because we also miss ‘Euphoria,’ as the people who create it, too. And just to give everyone who loves the show a little something so we have something to live on until we are able to go into a Season 2.”