“Space Jam” fans got a nice surprise on Sunday with a new clip of Zendaya voicing Lola Bunny in the upcoming sequel “Space Jam: A New Legacy” hitting (and trending on) Twitter.

The 13-second clip shows Lola talking to Bugs Bunny about the new version of the Tune Squad, with Lola confidently saying, “everyone knows this is Lola’s team.” Onlookers make it “sound like LeBron (James) had to save us,” Lola continues, but that’s not really the case.

“We’re the best teammates he’s ever had,” Lola says. “You know, don’t love the sidekick label but we’ll let it go because it’s LeBron.”

The “best teammates” claim is a bold one, considering James has played with Dwyane Wade, Kyrie Irving and Anthony Davis in their primes, among several other NBA All-Stars. 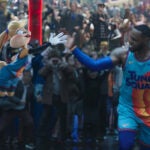 The first “New Legacy” trailer was released two months ago showed James teaming up with Bugs Bunny, Tweety Bird, Daffy Duck, Porky Pig, Taz and the rest of the Looney Tunes gang. Of course, the new “Space Jam” comes 25 years after the original, starring Michael Jordan, was released. The film was a box office hit, bringing in $230 million, and has since become a cult classic among many millennials, who enjoyed the film’s combo of NBA stars like Charles Barkley and Hollywood A-listers at the time like Bill Murray.

Now, “Space Jam: A New Legacy” aims to reinvent the franchise for a new audience, while appealing to nostalgic older crowds. The original film found Jordan roped into the world of the Looney Tunes as he faced off against the alien MonStars, who had absorbed the skills of other basketball greats, in an attempt to save Bugs and his cartoon pals from eternal slavery in an intergalactic traveling circus (yes, really).

The new “Space Jam” has a similarly off-the-wall premise in which James plays a heightened version of himself who has to rescue his son after he’s pulled into a virtual server controlled by an A.I. villain named Al-G Rhythm (Don Cheadle). James then recruits the Looney Tunes to play together as the Tune Squad and take down the Goon Squad in an epic basketball game. Along the way, the NBA legend gets stuck inside the Warner 3000 Entertainment “Server-Verse,” which shows the film poking fun at other WarnerMedia-owned classics.

Beyond LeBron, “Space Jam: A New Legacy” boasts a powerful roster — “Girls Trip” director Malcolm D. Lee is directing the film, and “Black Panther’s” Ryan Coogler is a producer. And you may find a few other current NBA and WNBA stars lurking in the film as well.

Warner Bros. will release “Space Jam: A New Legacy” this summer both in theaters and on HBO Max on July 16.