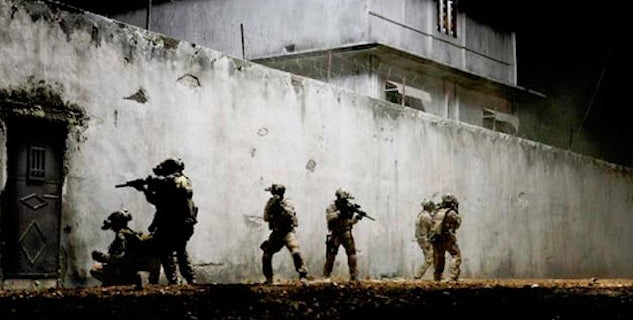 But the film has also — almost imperceptibly — changed our national debate about toture by illustrating waterboarding for a mass audience for the first time. The debate over the practice was largely tabled after President Obama banned its use quickly after coming into office in January 2009. But "Zero Dark Thirty" has revived it, and the film has gained enough attention to land Bigelow on the cover of Time.

Whether or not the film's depiciton of waterboarding is accurate, Americans can now discuss the same set of images instead of relying on their own perceptions of what it looks like. And almost everyone who sees it, from the right and left, agrees the version of waterboarding seen in the film looks like torture.

At the height of the war on terror, Americans were deeply divided on whether waterboarding was truly horrific or merely another unpleasant indignity inflicted on people being interrogated, like uncomfortable chairs or loud music.

A few years ago, varied perspectives on what waterboarding was colored the strikingly different perspectives of what happened to prisoners at CIA black sites. A July 2005 poll of 1,500 people by the Pew Research Center found that 43 percent were in favor of the use of waterboarding, with 53 percent opposed.

The next year, Vice President Dick Cheney went along with a questioner who characterized waterboarding as "a dunk in water," saying the issue was "a no-brainer."

That was just one attempt by the Bush administration to reframe what opponents called torture, using phrases like "enhanced interrogation techniques."

Years later, there is nothing resembling consensus on whether torture works. And "Zero Dark Thirty" has only inflamed opinons on the subject.

But at least it has framed a debate.

"The torture debate certainly shifted as a result, with conservatives pointing to the end game (we got Osama) and liberals shaking their fingers at how we caught him," Christian Toto, an editor and movie reviewer for the conservative site Breitbart.com, told TheWrap. "Great movies provoke these kinds of discussions. Ideological films, which Hollywood all too often delivers, tell us what to think."

But the question remains: Did the movie provide the right frame?

"The depiction has contributed to what is a distorted and incomplete debate about torture, and that's because the film starts off by claiming that it is based on first-hand accounts of facts," said Hina Shamsi, director of the ACLU's national security project. "It's a story that's about people who tortured, that humanizes the torturers. I don't think it glorifies torture, but it goes a long way toward justifying it."

She said the film's long opening scene, in which a detainee has water dumped on his cloth-covered face, leaves audiences believing it was a necessary evil. Pultizer Prize-winner Steve Coll to Sen. Dianne Feinstein are among those who say waterboarding did not, in fact, lead to bin Laden's death.

So far, Bigelow has said little about the accusations. She claimed artistic license with the film, and said more than once that "depiction is not endorsement."

"If it was, no artist would be able to paint inhumane practices, no author could write about them, and no filmmaker could delve into the thorny subjects of our time," she wrote in an essay in the Los Angeles Times earlier this month.

But Shamsi said the narrative, which focuses on a young, female C.I.A. agent hellbent on finding bin Laden, makes a hero of the wrong character.

"Ms. Bigelow talks about how the Jessica Chastain character was courageous — what was courageous about what she did? The fact that she crossed the line into illegality and immorality?" she said of Bigelow's Time interview. "What I thought was truly courageous in those years were the heroes within the CIA and the military who objected despite the tremendous pressure they were under from their political leaders."

The Heritage Foundation's James Carafano also takes issue with the film, but for a different reason: He said actual waterboarding is conducted within the confines of the Geneva Convention, with a physician present. That keeps it from crossing the line into torture, he said.

"They portrayed the public perception of what they think waterboarding looks like, but not how it works," Carafano, vice president of foreign policy and defense studies and a retired Army officer, told TheWrap. "Hollywood is just giving people what they expect."

He said "Zero Dark Thirty" did nothing to change the waterboarding debate and has just "momentarily struck a raw nerve because it's so brutal."