Chinese actress Zhao Wei has been scrubbed from the internet in that country after being placed on blacklist of so-called “misbehaving” celebrities, CNN reported Thursday.

Zhao Wei’s movies and television programs are no longer available for streaming in China and have been missing for a few weeks. Her social media accounts are gone, too, including her fan page on the heavily censored Chinese version of Twitter, Weibo. On Thursday, CNN brought wider attention to her case and the case of other Chinese celebrities with a segment that aired on “New Day.”

“Imagine one of Hollywood’s biggest celebrities erased from the Internet in a single night. That’s basically what happened to Zhao Wei, one of China’s most successful actresses,” CNN senior international correspondent Ivan Watson reported, noting that the actress had run afoul of authorities after buying vineyards in France and acquiring a stake in a large Chinese production studio. 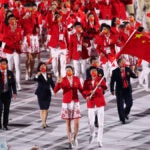 The Chinese government has been cracking down on entertainment and internet use in recent weeks, issuing new mandates about how often minors can access online gaming and entertainment sites and railing against the “chaos” of fan culture, idol selection shows and TV series featuring “sissy male” idols.

Zheng Shuang, another popular Chinese actress who was fined $46 million for tax evasion last month, has also had her works scrubbed from video sites.

According to CNN, this is proof there is only room for “one real star” in the country: President Xi Jinping.