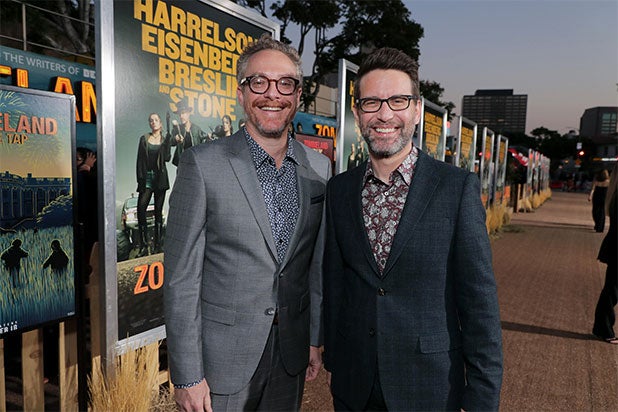 It may have taken 10 years for “Zombieland: Double Tap” — the sequel to “Zombieland” —  to hit the big screen, but that doesn’t mean writers Rhett Reese and Paul Wernick don’t have an idea for a potential third film.

“We were in Atlanta shooting and it was cold and Woody [Harrelson] was like, we should do the next one on an island,” Wernick told TheWrap. “Everyone was like, I love that idea. Standing in the cold in the middle of the night, somehow, island life sounded much better. But I was like, creatively, that’s not the best choice, but as of right now, that sounds like a pretty great idea.”

Reese added, “I think I got it: I think the cure to the zombie illness has to be Fiji water, so they have to go to Fiji!’

“‘Fiji Water’s Zombieland 3’ is what we should call it,” Wernick pitched, to which Reese agreed: “Get some good product placement, get some free water for all of us. I’m already liking the way it’s shaping up.”

According to Wernick, Harrelson wants to do another 10 “Zombieland” movies: “I don’t know if 10 is in the cards, but maybe one. We’re not thinking about it though, we’re just bracing ourselves for this weekend and keeping our fingers and toes crossed that it does well.”

TheWrap also spoke to the writing duo about the challenges of writing a sequel a decade later, why it took so long, and which character is the most fun to write lines for. Check out the Q&A below.

Also Read: Emma Stone Wants to Make Another 'Zombieland' in 2029

TheWrap: Going into the sequel 10 years later, what were your biggest goals?

Paul Wernick: I think our biggest goal was for fans to love the sequel as much as they did the first one, and the pressure to deliver on a sequel of a beloved movie is immense and we all wanted to be worthy of the first one. That’s why it took us 10 years — one of the big reasons was getting it right so that it lived up to the first one.

Rhett Reese: There is a ton of pressure when fans take ownership of a project they love. We felt it on “Deadpool,” we felt it on “Zombieland.” You write with trepidation, but you also don’t want to let the fear get in the way.

Wernick: We wanted the movie to have the scares and have the action, and primarily the laughs and heart. The first movie was a love story and was about this family, and it’s a romantic comedy, and we wanted to give the audience the same mix of elements the first one had, but with these new voices, these characters that come in but not have them take over the movie.

What were your challenges?

Reese: The hardest thing was the passage of time. Little Rock was 12 years old in the first movie, and we started writing the sequel right after the first movie came out. We wrote it for a 12-year-old and then time started to pass and that was no longer working because she went from a little girl to a young woman. The story had to move in a different direction. A couple other writers came on while we were on “Deadpool” and helped restructure it and run with this idea that Little Rock was coming of age and met a boy and our guys had to save her. We came back to rewrite and put finishing touches on. But anytime a movie takes that long to make, the chronology of the real world can affect the chronology of time in the movie. Emma. Woody and Jesse, they all look the same — somehow, those guys slept in hyperbaric chambers at night. But Abigail made it very clear that time had passed and we just needed to honor that.

Did it really take this long to get a script because of “Deadpool?”

Were you ever worried about time passed?

Reese: I don’t know. Maybe. Every movie is subject to its own forces — sometimes you think maybe it’s better when time has passed, and in general, delay is a normal thing that happens in Hollywood, things take longer than you think, so you’re always fighting that battle. Gosh knows, if you wait long enough, regimes change. We lucked out. Sony changed its regime midstream and usually that’s death, but Tom Rothman came in and saw the appeal of “Zombieland” and wasn’t stressed by the fact that it had begun when he was at a different studio and he rolled up his sleeves and got down to business, and that was a testament to his foresight.

How do you one-up something that already was so insane and original 10 years ago? What did you know you’d have to do to rope people back in?

Wernick: Inherently, in “Zombieland,” the stakes are a lot lower and that’s odd to say because they live in a world where they turn the corner and could die in any moment. The worlds we like to create are extraordinary worlds with ordinary problems. We didn’t want to make it bigger — keep the stakes low, keep it grounded and keep it real and make it about this family and meeting new people and yes there are zombies but that’s kind of on a back burner. That’s why people who aren’t zombie fans love this movie — it’s not really a zombie movie… Woody tells the story of when he had the script for the first one and it sat on his desk for four months because he wasn’t going to do a zombie movie — all he did was read the title page. And he kept putting it on the bottom of the pile, and his agent was like, “read it!” But when he finally read it, he was like, I gotta do it! It’s about making the story about people.

How much research do you have to do about zombies, if any?

Reese; None, I would say! We didn’t on this one, and it comes from the gut and making stuff up and we tried to run with the idea that zombies are evolving because evolution is a real thing, but really, we didn’t do any research. It’s not that we’re lazy, it’s just that zombies don’t exist so it does allow us to put our imprint on things. We will guide our experience to what the plot is — we generally want to justify our plot rather than be true to some reality.

Wernick: What sets “Zombieland” apart from “The Walking Dead” is ours is a fun view of the world. It’s hard to draw on some of these other zombie projects, because in our film, you could sleep in the White House if you wanted, like, oh my God, this is kind of the best. To draw on other projects would be a mistake.

Which character was the most fun to write for?

Reese: My favorite to write is Columbus (Jesse Eisenberg) — he’s based on me so it’s the easiest character for me, so I just think, what would I do? But I like to think he’s a funnier, wittier version of me.

Wernick: I love Tallahassee (Woody Harrelson) so much. He has this carefree attitude and he speaks to me in a way that personally makes me smile. It’s his voice in my head that I hear when I’m writing.