Anyone in the world of style knows that a fashion show should build until it ends with the kind of show-stopping garment that brings the audience to their feet. Sadly, “Zoolander 2” front-loads its few clever moments in the first 10 or so minutes, and the rest of the movie is a forced march to not-funny.

2001’s original “Zoolander,” built around an impressively stupid male model character originally created by Ben Stiller for the VH1 Fashion Awards, managed to be the kind of pleasantly dopey movie that becomes the background for a late night with friends and that spawns the sort of random gags that live forever on YouTube. But whatever slight magic maintained that movie is sorely missing here, leaving us with a cavalcade of gags that fall flat and cameo appearances that are more impressive on a look-who-they-got scale than for inspiring any mirth.

“Zoolander 2” lobs out its most daring joke under the opening credits; the first movie, you may recall, opened not long after 9/11, rendering somewhat touchy its subplot about model Derek Zoolander (Stiller) being hypnotized to murder the Malaysian prime minister. So when we see a clip of anchorwoman Katie Couric talk about a New York catastrophe as “something out of a Hollywood movie,” it’s a shock to discover she’s actually referring to the collapse of Manhattan’s Derek Zoolander Center for Kids Who Can’t Read Good and Who Wanna Learn to Do Other Stuff Good Too.

That’s a level of chutzpah that’s otherwise missing from this sequel, written by Stiller and Justin Theroux (“Tropic Thunder”) and Nicholas Stoller (“The Muppets”) and John Hamburg (the “Fokkers” trilogy). Sure, there are some other stabs at controversy, but none of them stick; Benedict Cumberbatch pops up as a gender-ambiguous model named “All,” but before we can figure out if the film is making fun of All, or making fun of Zoolander for being confused by All, All is gone and never heard from again.

Which leaves us with Derek, who’s been living in the frozen wastelands of New Jersey since the collapse of the Center killed his wife Matilda (Christine Taylor), and led to the authorities taking Derek Jr. away. One day, Billy Zane (as himself) turns up with an invitation that Derek can’t refuse: a trip to Rome to walk in a show for hot young designer Don Atari (Kyle Mooney, spouting geysers of trend-gibberish) who works for fashion magnate Alexanya Atoz (Kristen Wiig). 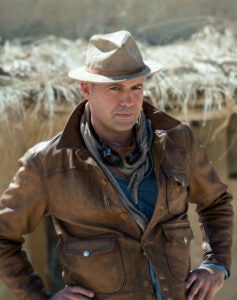 Throw in some pop-star murders, an INTERPOL Fashion Police agent named Valentina (Penélope Cruz), Fred Armisen digitally transformed into an 11-year-old boy, a surprising new look for Derek Jr., the return of Mugatu (Will Ferrell) and a guest list’s worth of industry giants, and you get – actually, you wind up waiting for all of this to go somewhere amusing, but the fun disappears from the film sometime around when Zane does.

It’s fine if “subtle” isn’t going to be in the film’s vocabulary, but “Zoolander 2” strikes the same gongs over and over again. We learn early on, for instance, that Wiig’s character crazily mispronounces words in some cryptic European accent, and that her feet never touch the ground. And in her next four or five appearances, we get that joke again, and again. There are no build-ups or pay-offs here, just a lot of random moments of people saying stupid stuff, and fashion people being gently lampooned.

Even with four writers on hand, this smacks of “we’ll make up something hilarious on the spot,” never accounting for the fact that everyone in the cast seems at least a little jet-lagged. Scene partners don’t seem to be on the same frequency, and the timing often falls flat, and the result is a movie that – in my audience, anyway – exhausted the good will and anticipation of people who were hoping to be entertained but ultimately capitulated to the general airlessness of the final product.

For pure comedy, you’re better off with one of those online mega-mix videos of models falling down on the runway.