Disney’s animated features are so wrapped up in either princesses or talking animals (sometimes both) that one can be forgiven for approaching “Zootopia” — a whole metropolis of anthropomorphized critters! — with a certain wariness. Thankfully the creators of this expansive adventure, a crime-solving saga starring a bunny who wants to be a cop, have a bit more in mind than the usual strains of aww-dorable humor and frenetic action.

There’s plenty of that, for sure. But with its upfront themes of prejudice and diversity, and its release at a time in which society’s biases are under the microscope, “Zootopia” may be one of the more fortuitously scheduled family entertainments in recent memory.

The world of “Zootopia” is one in which animals decided long ago that the whole predator/prey model was a primitive dead end, and that living together in harmony would curb bloodlust and lift everyone up. We learn this history in the opening scene via a charmingly ramshackle school play performed in rural Bunny Burrows.

One of the kid performers is young Judy Hopps (voiced by Ginnifer Goodwin), a gung-ho rabbit whose career goal isn’t following her parents (Don Lake and Bonnie Hunt) into carrot farming, but rather — to everyone’s dismay — becoming a police officer, a field typically populated by larger mammals like rhinos and hippos. Though the world is supposedly safe for all creatures, we already see two prejudices at play: fear of the big city, and, in a nasty encounter Judy has with a bullying local fox, a belief among rabbits that while foxes might not be mortally dangerous anymore, they’re still not to be trusted. 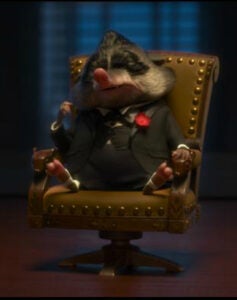 Her first day she’s hoodwinked by a smooth, cynical con artist fox named Nick (Jason Bateman), but when given the opportunity to solve her first case, involving an otter who’s gone missing, Judy realizes Nick may be just the kind of wily operative who can help her. Nick, who doesn’t buy the rosy “anyone can be anything” ethos of Zootopia, is naturally reluctant.

From there it’s a standard buddy comedy/detective story, albeit one in which the rogue’s gallery includes a “nudist” hippie yak (Tommy Chong), a fast-talking weasel (Alan Tudyk), and a crime boss named Mr. Big who in reality — drum roll, please — is a tiny shrew. And while it may sound obvious to populate this universe’s Department of Motor Vehicles with sloths, the bit is still funny in execution.

The investigation also takes them into some of Zootopia’s climate-and-terrain-specific boroughs, which include snowy Tundratown, and the lush, tree-intensive Rain Forest District. These detailed, colorful landscapes give the artists and animators some of their best chances to shine, but the craftiest sequence is a perilous chase through Little Rodentia, a rodent-scaled town in which Judy is for once a towering, scary giant.

Eventually, Judy and Nick uncover something more wide-reaching and nefarious than a missing mammal: an engineered plot by a mysterious villain to return predators to their once-savage, uncivilized nature. The irony is that while the investigation and conspiracy stuff make for some schematically draggy moments, they also trigger the movie’s admirably thorny passages regarding its message about the treatment of others, and the pitfalls of prejudice.

What started as Judy and Nick charmingly bickering about how each views the other — “cute” and “dumb” are slurs to bunnies, as “sly” is among foxes — becomes a larger crisis when citywide panic leads certain animals to be viewed as potential threats, and treated as second-class citizens. Judy’s attempt to assuage Nick by saying “You’re not like them” backfires, as it always has in the history of race relations.

If that makes “Zootopia,” which was directed by Byron Howard, Rich Moore and Jared Bush (who also wrote the screenplay), sound like a downer, it’s not, unless you considered “Who Framed Roger Rabbit” medicinal about its industrial corruption plot. Goodwin’s bouncy performance and Bateman’s well-honed comic delivery are ideally matched, and there are enough lively characters and snappy scenes to keep even the clichéd elements humming, even the usual inside jokes (including one about “Frozen”). Parents can be assured of a happy ending, too, in which Zootopia’s biggest recording star Gazelle (Shakira) kicks off the credits with an inspirational dance tune, “Try Everything.”

And yet its moral ambition gives “Zootopia” enough of a refreshing twist to stand out from the rest of the animated pack. After the animals on screen finish talking, parents and kids just might be inspired to have their own discussion about the movie’s well-intended message.