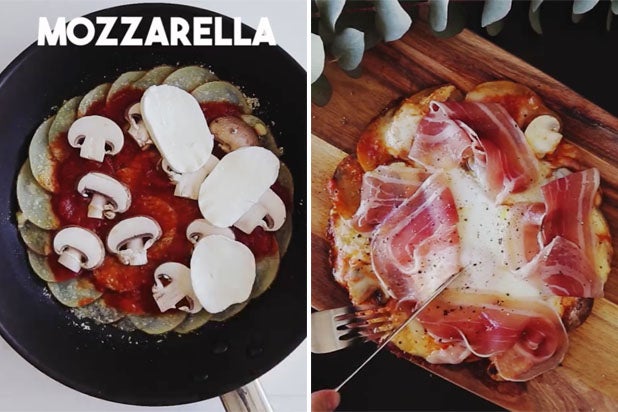 If you’re a regular on social media, chances are you’ve scrolled across an oddly fascinating, short video clip of someone — or rather, someone’s hands — cooking a dish in your feed. But unlike complicated Pinterest tutorials or lengthy cooking shows with countless commercial breaks, the recipes look easy, fast and delicious, and are addictive to watch.

Platforms like Tastemade, BuzzFeed’s Tasty, and now even the Food Network — usually known for its traditional cooking shows and reality contests like “MasterChef” — are bringing a fresh take to the culinary arts on social media.

To date, Tasty’s main Facebook page has garnered over 64 million likes while Tastemade’s has over 18 million. Though some of these platforms’ most popular recipes are notably geared toward younger audiences’ palates (think: mozzarella stick onion rings and sushi burritos), they boast a range of entertaining-to-watch recipes that have broad appeal.

“We always talk about how there are so few things in the world that have such universal appeal as food does,” Tastemade head of programming Oren Katzeff told TheWrap in an interview. “You have food people love and love to watch and talk about and take pictures of, and you now have more platforms than ever with tons of people on them.” While cooking videos aren’t new, the new social-first formatting resonates with an audience that’s always on a device and scrolling through to the next best thing, according to Vikki Neil, senior vice president and general manager of digital brands for Scripps Networks Interactive, which owns Food Network.

“You can see something come together very quickly, it’s colorful, and in 30 seconds you can either fantasize or actually plan what you might want to do,” Neil told TheWrap. “It’s an easy recipe. If you can do it in a video, chances are, I think people believe they can do it when they get home.”

Within the last few months, Food Network has amped up its made-for-social content in response to growing demand, publishing roughly 100 videos per month on its Facebook, Snapchat and Instagram accounts. These videos average more than 540 million views across platforms each month, according to Neil. The network also recently surpassed ESPN as the most-engaged TV network on Facebook.

“People love food, everyone eats, and food says a lot about this next generation and how they identify themselves and how they show that they’re open to new and different things,” Neil said. “I think that’s really reflective of how we’ve embraced it at our company and how this world has evolved.”

For Tastemade, which has received funding from Scripps Networks Interactive, that means providing a variety of content beyond just the traditional cooking show or the popular “hands-style” videos made specifically for Facebook.

Tastemade employs a slowly rotating team of “Tastemakers;” personalities from around the world who host their own cooking shows and interact with viewers through social media to drive the brand’s content and build a solid fan base.

“It’s not uncommon for us to get some Twitter feedback from our fans who say, ‘Where’s Frankie Cooks? He hasn’t been on Snapchat in two days, where did he go?'” Katzeff said. “I think we’ve got the right mix of people and content opportunities, and what we’re trying to do is showcase the talent that we know our audience loves, while at the same time introducing new faces over time.”

The company — which puts out about 20 videos across multiple platforms in the U.S. per day, according to Katzeff — also boasts a variety of other food and travel content on YouTube and Apple TV, such as a series which explores all the flavors of Kit-Kat in Japan and another which shows someone cooking miniature food, called “Tiny Kitchen.” Live streaming has also found a home with this new style of cooking content. In addition to bringing in latte and pancake artists to create designs at the company’s Santa Monica studio, Tastemade recently broke the world record for the longest cheese pull and raked in almost half a million views in the process.

“There’s a real reason for you to be watching it live because you can take part in the fun and you can actually watch something being created right there,” Katzeff said. “There’s kind of some element of suspense to it: Will this burger topple, or how many ingredients before the burger topples?”

To reach the growing and global demand for food content, Tastemade and Tasty have also branched out to create separate social pages with recipes tailored to different regions, such as France, Britain, Germany, Japan, Brazil, Spain, Indonesia and more.

But despite the rapid success of food content on social media, Katzeff said there are endless ways in which the social media kitchen will need to expand and evolve in the future, such as through new platforms like virtual reality or with more content reaching bigger audiences.

“The challenge is to make sure that every single day our content is amazing,” Katzeff said. “As I always like to say, no one cares if you were great yesterday — you’ve got to be great today. If you go see Aziz Ansari perform comedy tomorrow, you want him to be funny tomorrow. It doesn’t matter if he was funny a week ago.”