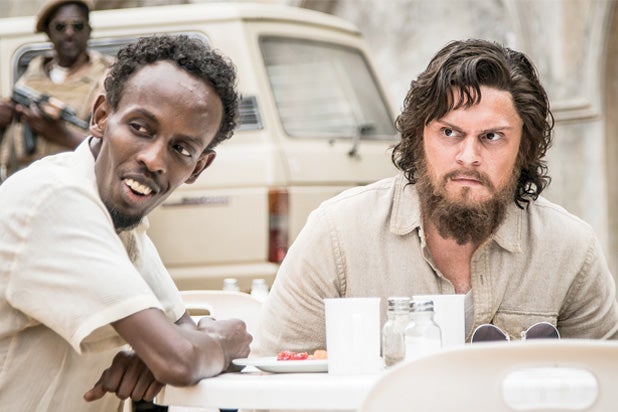 The pleasingly self-aware and fast-paced “Dabka” begins with narration by journalist Jay Bahadur (Evan Peters) telling us that he hates movies where the main character narrates because that means that the screenwriters haven’t done their job to make the story work on a visual basis. While that may be true in some cases, “Dabka” itself is a movie where the brash but insecure voice of Bahadur grounds the story we are watching, and this voice also gives it some tension because we are never sure if his over-confidence might lead to disaster.

Based on a true story, “Dabka” begins in 2008 right after Bahadur graduates from college and his high school girlfriend breaks up with him. Unable to find a job, he is still living at home with his parents and doing a tedious marketing job until a chance encounter with the retired journalist Seymour Tolbin (Al Pacino).

Pacino offers the same loopy mentor performance that he has given many times before, but he and Melanie Griffith, who plays Bahadur’s mother, are basically special guest stars in this movie, which is carried by Peters in a high-energy and very appealing performance.

Tolbin advises Bahadur to make his name by going to a dangerous place where no other journalist will go, and so Bahadur decides to go to Somalia because major news organizations are not sending reporters to cover a risky Somali pirates story. The spunky and even foolhardy Bahadur has nothing to lose and everything to prove, and “Dabka,” which means “fire” in Somali, traces his sometimes-blundering attempts to get a story and sell a book without unduly sensationalizing a country that he admires.

Bahadur is aided in this effort by his translator, Abdi, who is played by Barkhad Abdi, the actor who made such an impression playing a Somali pirate in “Captain Phillips” with Tom Hanks. This time Abdi plays a man who proudly wears an Obama hat and does everything he can to help Bahadur get a meeting with two of the main players: Boyah (Mohamed Barre), who is thought of as a Robin Hood figure, and the more menacing Garaad (Mohamed Osmail Ibrahim). Both of these men prefer to be known as “coast guards” rather than pirates, and both require the gift of drugs before consenting to an interview.

Bahadur dreams of his ex-girlfriend and starts growing a beard that eventually reaches mountain man length. He tries hard to secure a book deal with the material he is gathering, but he gets turned down with his least favorite rejection letter word, “unfortunately.” (As in, “Unfortunately, we just don’t feel this book is right for us.”) As played by Peters, Bahadur has a kind of nutty desperation about him that makes you worry that he’s going to get himself or someone else hurt.

While staring out his window one day, Bahadur sees a very alluring young woman named Maryan (Sabrina Hassan) who sells drugs in the local market, and she looks back at him with a classic “come hither” stare. Maryan is one of Garaad’s wives, which makes her an extra-dangerous woman to pursue, but as usual Bahadur can’t help himself from going after a perilous goal.

As he gazes at Maryan at the market, Bahadur tells us in voiceover that we are not likely to meet our great love but that this likelihood is “enhanced by reckless behavior and naiveté,” and this counts as one of his most attractive moments.

“Dabka,” which is well written and directed by Bryan Buckley, bases its narrative on the burgeoning friendship between Bahadur and Abdi and the flirtation between Bahadur and Maryan, who enjoys American movies but dislikes “Black Hawk Down” because she feels it does not do justice to her people.

At one point toward the end of Bahadur’s visit to Somalia he sees a man on a horse with a sword who announces that there is a certain point when “life and prosperity is forbidden to an honorable man,” a concept that you are not likely to hear in the West. “Dabka” winningly traces the ways that a callow American gets schooled in concepts like honor and sacrifice until he is considered an expert on a country and a people that he grows to love.