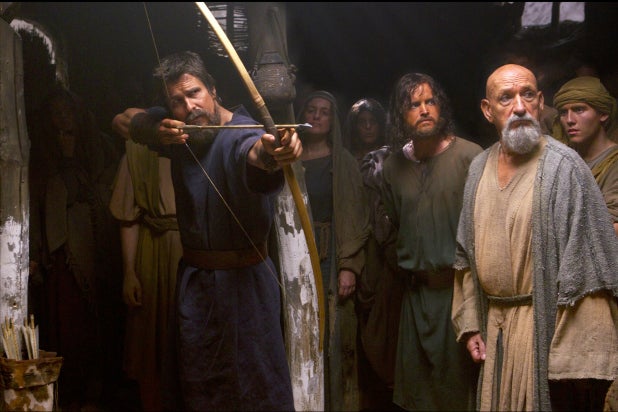 If you’re going into “Exodus: Gods and Kings” thinking that director Ridley Scott is going to give the Moses story anything we didn’t already get from Cecil B. DeMille in two versions of “The Ten Commandments,” prepare to be disappointed. This stodgy adaptation creaks with solemnity — not to mention reactionary casting choices — and apart from some nifty frog and locust infestations, even the special effects pale next to a wind-blown Charlton Heston parting the Red Sea.

Filmgoers and filmmakers alike return to the same stories over and over again, seeking comfort in familiarity while also finding subtle ways to upend that familiarity with technical innovations or new degrees of psychological insight. We know the specifics of the murder of Bruce Wayne’s parents as well as we know the Passion Play, while surprise is not among the delights we take in following the exploits of either Count Dracula or Ebenezer Scrooge.

The unspoken rule in all this repetition, however, is that the writers and the director bring something new to the proceedings, whether it’s cutting-edge CGI or smarter dialogue or just good old-fashioned showmanship and pizzazz. Make the package exciting, and we’re all less likely to notice the same old product inside.

That’s not what happens here. You know the story by heart: Moses (Christian Bale) and Rhamses (Joel Edgerton) are raised as brothers in ancient Egypt, with the latter set to inherit the kingdom from the Pharaoh Seti (John Turturro). The current ruler knows in his heart that his adopted son Moses would make a better heir to the throne than his own son, but blood will out, especially with Rhamses’ mother Tuya (Sigourney Weaver) vamping about and resenting her son’s close bond with the foundling.

Did you notice how Anglo the leads are? If you want actual Semites, look to the extras and the supporting players; this is the kind of movie where the more lines you have, the more likely you are to have jars of bronzer waiting for you in the makeup trailer.

Anyway, word gets out that Moses was actually born a Hebrew, the race that the Egyptians have enslaved for centuries, and he gets cast out into the world. In his wanderings, he starts hearing from God (represented here as a petulant British schoolboy, because when Moses is Welsh and Rhamses is Australian, all bets are off) and is ultimately convinced to become a leader of the Hebrew rebellion.

Whether or not you found the looniness of Darren Aronofsky‘s “Noah” to be effective, at least it was an attempt to inject some life into an ancient tale, one where all the characters mainly exist in service to their role in the story, with perhaps a personality facet or two if they’re lucky. With the exception of Moses learning his true identity and grappling with his role in history — which Bale does fairly stiffly — everyone else gets one note to play, whether it’s arrogance or kindness or humility or sadism.

The big set pieces don’t pop enough to justify this movie’s existence; there’s a battle against the Hittites early on that has the sweep you’d expect from Scott, but it’s never as thrilling as some of the sequences in his director’s cut of “Kingdom of Heaven.” Even the parting of the Red Sea disappoints; the liberated Hebrews cross over in what seems like an accentuated low tide, and let’s just say that “Interstellar” has raised the bar on computer-generated giant walls of water.

Moses’ liberation of his people and his leading them across the desert to Canaan ranks among the archetypal epics of rebellion and triumph, but “Exodus: Gods and Kings” never successfully captures the perils or the victories. At best, you’ll leave humming the plagues.