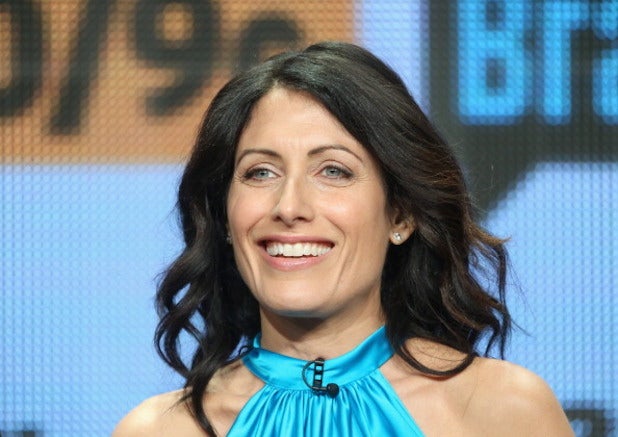 In the wake of banned outdoor ads for her new scripted series “Girlfriends’ Guide to Divorce,” Bravo star Lisa Edelstein has one question: Why?

Advertisements for the show were allegedly yanked for “inappropriate” content. The ad in question features Edelstein raising her ring finger with the tagline, “Go Find Yourself” (see below).

“Why is it racy?” Edelstein asked during an interview with TheWrap. “Why is a woman holding up her ring finger saying, ‘Go find yourself’ so offensive?”

“[Especially] when there are posters out there of needles going through eyeballs, and dead bodies and women’s asses and boobs hanging out with the nipples holding onto fabric for dear life?” Edelstein said.

Likely referring to the jarring ads for FX’s “The Strain” (in which a worm enters an eye) and other advertisements belonging to this year’s booty trend, Edelstein didn’t find the “Girlfriends’ Guide” artwork remotely exploitative.

“I heard one news report saying that it’s a show that threatens the very fabric of our society, because … it was disparaging to the sanctity of marriage. But, this is a show that’s very much about relationships.”

Both the New York Metropolitan Transportation Authority and the private owners of L.A. malls The Grove and The Americana at Brand declined to use the ad, an individual with knowledge of the situation previously told TheWrap.

Dom Camera, managing partner of New York-based advertising agency Dom Camera & Company, confirmed the insider’s version of what happened. “I was told the NY MTA rejected the ad and deemed it inappropriate,” Camera said in a statement.

“It was a really surprising reaction,” she said. “This wasn’t anything that Bravo expected and they scrambled for about five minutes to figure out what they could do with an alternative poster.”

Bravo declined to change the artwork.

“The ad is an accurate representation of the show’s humor, attitude and story, so rather than ‘divorce’ this creative concept — we found alternative sites for it to run in NY and LA,” a Bravo spokesperson said in a statement to TheWrap on Sunday.

Those alternate sites include phone kiosks and tour buses in both New York and L.A., where the ad was rejected by Metro Los Angeles.

Based on Vicki Iovine’s “Girlfriends’ Guide…” book series, “Girlfriends’ Guide to Divorce” is Bravo’s first scripted series. It follows Abby (Edelstein), the author of a self-help book series who’s hiding her separation from her husband from the public. Starting her life over again as a single woman in her 40s, she finds that advice from divorced friends leads to startling new adventures.

See photos of the advertisement wrapped around StarLine tour buses in L.A. below: