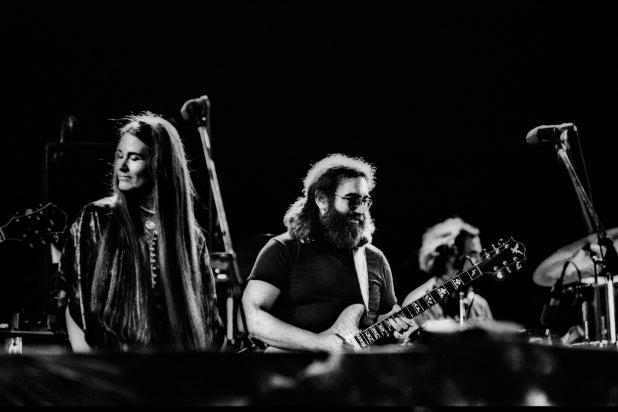 You don’t need a VR headset to watch Amir Bar-Lev’s documentary about the Grateful Dead, “Long Strange Trip,” because this four-hour movie is as immersive a wade into the waters of the Bay Area-germinated psychedelic band’s history as 2D gets. That being said, if you devoted 240 minutes to a history of, say, KISS — another group with decades of fame, devoted fans, and controversy — you might also earn the word “immersive,” but it wouldn’t feel justified.

With “Trip,” which was executive produced by Martin Scorsese and feels of a piece with that filmmaker’s own music docs (about Bob Dylan and George Harrison), there’s a groovy synergy to spending so much movie time with an outfit famous for its unlikely impact, free-wheeling jams, pharmacological notoriety, Guinness-recognized touring prowess, and ever-expanding fan base, who catalog performances with the care and precision of archaeologists.

And in the story of hippie rock god Jerry Garcia alone, the comprehensive length bestows an added heaviness to the beloved frontman’s own funny, funky, and ultimately tragic journey trying to keep the good time going for as long as he could. You don’t have to be a Deadhead, or even a casual listener, to find in “Long Strange Trip” a compelling tale of what happens when iconoclasts become icons.

To give an appropriately epic story its due, Bar-Lev (“The Tillman Story”) breaks the movie up into theme-meets-timeline acts with titles like “This Is Now” (young group struggles), “Who’s In Charge Here?” (successful group struggles), and “Deadheads” (massively successful group struggles). But the throughline that proves most resilient comes in the opening moments, with a Garcia interview clip from just before his death, in which he talks about the impact of the Frankenstein myth on his childhood, specifically the 1948 film “Abbott & Costello Meet Frankenstein.”

For a fearful kid who’d just lost his father, a movie that leaned into bizarreness gave him hope. Says Garcia, “I thought to myself, ‘I want to be concerned with things that are weird. That seems like fun.'” Cue the assembled influences: the beatniks, Haight-Ashbury, LSD-fueled happenings with Ken Kesey.

Record contracts required them to go into the studio and lay down tracks, but for the Dead, the live gig was the real feast. The fun was in the ephemeral and the flowing, in connecting with bandmates and audiences. A sound designer describes abandoning his post in the mixing truck to watch Garcia play “Morning Dew” from the audience, making accidental eye contact with Garcia, then getting a nod as if to say, it’s OK, enjoy the moment. When Garcia visited L.A.’s Watts Towers, its solidity unnerved him. He saw nothing enjoyable in building a monument for posterity.

The be-here-now approach didn’t make for the smoothest-run or most responsible of organizations, however, as related by their early-’70s tour manager, a wiry Brit named Sam Cutler, the movie’s most vividly anecdotal interviewee. While touring (and drugs) built their reputation, drugs (and touring) took their toll. (Much is made of how dangerous it was in to accept a beverage of unknown provenance from any band member.)

As the group grew into a road behemoth that spawned a fan culture of tie-dyed twirlers and tape-obsessed tokers willing to see every show — concerts became known as much for the out-of-control Deadhead scene as what happened onstage — Garcia grew more uncomfortable with his deified status, and retreated further into heroin. Drugs had gone from tripping the fantastic, to triggering the escape hatch.

Especially heartbreaking is a final-act sequence in which Garcia is nudged into reconnecting with old flame Brigid Meier, first shown earlier in the film in previously unseen home movies, and who had given him his first acoustic guitar. It’s a short-lived rekindling, however, due to the musician’s addiction. With Garcia’s death, in 1995 at age 53 from a heart attack, it’s not surprising “Long Strange Trip” ends shortly after.

What makes Bar-Lev’s accomplishment so rewarding is how skillfully he weaves it all: the unearthed archival footage, interviews (mostly the core group and key insiders), and a biographical tempo that never lets the celebration bore the uninformed, or the darker elements unduly harsh the buzz. There’s room for Al Franken to argue entertainingly for the 1980 Nassau Coliseum recording of “Althea,” and for Phil Lesh to movingly wonder if less touring and more focus on Garcia’s problems might have saved his bandmate and friend.

The levels always feel right in Bar-Lev’s mix, so that no section ever feels like a solo that’s gone on too long. The touring/backstage footage alone, from the Acid Tests in the ’60s to the famed European tour in the early ’70s, and through the stadium craziness of their money-making heyday, would make any documentarian envious as a visual chronicle of a true rock odyssey.

It’s no secret irony that the archive of Dead recordings left behind — from over 2,000 performances — pushes against Garcia’s distrust of eternal totems. But it’s also realistic to imagine that, wherever he is in the rock cosmos, if he could screen “Long Strange Trip,” he’d give Bar-Lev the same nod that sound designer got.