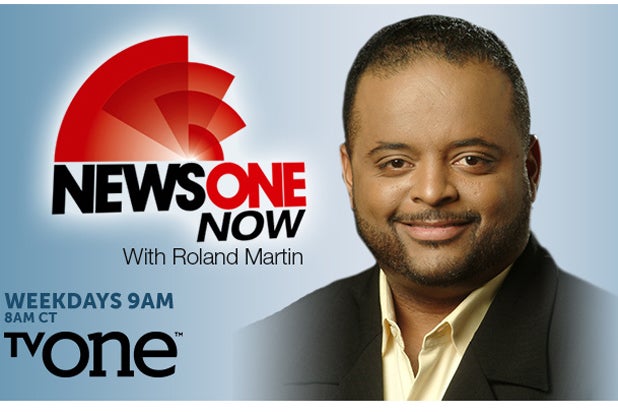 When “News One Now” premieres on TV One on Monday, it will be the first morning show any black network has launched and the first daily show in TV One’s nine-year history.

“This is probably one of the most important things I’ve done in my career,” anchor Roland Martin told TheWrap.

The show, a simulcast of the third hour of Martin’s Radio One show, will provide coverage of news and current events from a black perspective, something that Martin said has been lacking in mainstream media broadcasts.

It’s been in the works for some time. “The show started when Alfred Liggins, the CEO [of Radio One and chairman of TV One], and I met last year,” Martin said. “Alfred said, ‘you know what? We really need to have a daily news presence.'” Radio One and its NewsOne website were already there, so the decision was made to build on the brand and create a show that would premiere with a radio and web presence already in place.

Martin has been with TV One since 2005, and rose from providing occasional commentary to hosting a weekend show that ran from 2009 until May 2013. He also contributed to CNN for six years, leaving in April as new CEO and president Jeff Zucker began to re-shape the network. His time at CNN was not without controversy — in 2012, he was suspended from the network for a month after being accused of homophobia for a pair of tweets made during the Super Bowl appeared to advocate violence against gay men.

“I spent six years at CNN, and I’ll tell you what’s frustrating: a lot of times when the economy would come up you would just sort of talk about stuff in general … but what is the black unemployment rate? The black female, the black youth? And the same for other groups. This is really an opportunity for us to focus like a laser on those issues.”

This isn’t just the fault of the people those networks put in front of the camera, which, with a few exceptions, have been predominantly white. It’s also the culture of those networks and behind the scenes that Martin blames for the lack of diversity in news broadcasts.

“News One Now,” Martin said, will strive to highlight the accomplishments of African-Americans and make members of the community more visible.

“There are issues that are important to our community,” Martin said, noting that news stories like the investigation into the death of Kendrick Johnson and the new trial for Marissa Alexander, who received a 20 year sentence for shooting at her husband despite her argument that it was in self-defense as defined by Florida’s “Stand Your Ground” law, get only a passing glance from other news shows.

“News One Now” will “shine a light on these stories … you name it, we’ll be dealing with this stuff and speaking to our audience in a very unique way,” Martin said.

Martin’s experience at CNN will help prevent “News One Now” from falling into the same traps as other news shows – one of his “greatest frustrations” with CNN, he said, was its tendency to reduce stories to political divisions rather than discuss the issues involved.

“I am sick and tired of the red box, the blue box. The Democrat box and the Republican box. The liberal box and the conservative box,” Martin said. “It should be a debate based upon the issues. Will there be people who are openly partisan? Yes. But for me, I’m not having that discussion because I don’t believe people get anything out of that pissing match … I don’t believe our audience wants to see that same tired trite weak debate that you see elsewhere.”

“It’s cheap, it’s easy and it doesn’t require much thought,” Martin added. “Put a Republican against a Democrat, you know there are going to be some fireworks, it goes viral. But when you actually listen to it, they said nothing.”

While the show is aimed at African-Americans, Martin said it will address issues that should be of interest to everyone.

“What we’re simply doing is offering a different perspective and we’re speaking to the world through a different lens,” Martin said. “I would hope people who are white, Hispanic, Asian — anybody would say, ‘hey, let me check that out because guess what? If I can learn something, if I can experience something different, that’s always a good thing.'”