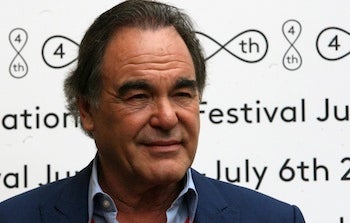 Edward Snowden is “a hero” and the rest of the world should stand up to the United States and offer asylum to the NSA whistleblower, director Oliver Stone said in a Fourth of July appearance at the Karlovy Vary International Film Festival on Thursday.

“It’s a disgrace that Obama is more concerned with hunting down Snowden than reforming these George Bush-style eavesdropping techniques,” said the outspoken, politically-charged filmmaker during an afternoon press conference at the Thermal Hotel in Karlovy Vary.

Stone, who won an Oscar for directing “Born on the Fourth of July” in 1989, spent his Independence Day in the Czech Republic, showing two episodes from his television series “The Untold History of the United States” and blasting the U.S. for the “global security state” he said it has created.

“To me, Snowden is a hero, because he revealed secrets that we should all know, that the United States has repeatedly violated the Fourth Amendment.” Stone said. “He should be welcomed, and offered asylum, but he has no place to hide because every country is intimidated by the United States.

“This should not be. This is what’s wrong with the world today, and it’s very important that the world recognizes and gives asylum to Snowden. Everyone in the world is impacted by the United States’ Big Brother attitude toward the world.”

Throughout the press conference, Stone resisted the moderator’s attempts to rein in his long answers, which were full of details from the last 70 years of U.S. foreign policy. “It’s the story of a great country that loses its way when it becomes obsessed with national security,” he said.

He also told the room of mostly European journalists that their countries should resist U.S. pressure. “We need countries to say no to the United States,” he said.

“The United States is the dominant power in the universe, with its eavesdropping abilities, cyber abilities … It’s what they call in the Pentagon ‘full spectrum dominance.’

“And the world is in danger with our tyranny.”

In addition to screening episodes of “Oliver Stone‘s Untold History of the United States” dealing with the atomic bomb and the War on Terror, Karlovy Vary presented the “ultimate” cut of Stone’s “Alexander,” as well as “Scarface,” which he wrote.

“Untold History” debuted at the New York Film Festival last October and aired on Showtime in November. Stone said he and coauthor Richard Kuznick are working to get a book based on the series into high school libraries.

But he also pointed to “Savages” as proof that he can make apolitical movies, and he insisted that he is now drawn to subjects to make political points.

“I’m a dramatist,” he said at one point. “I don’t do movies for ideological reasons, I do them because they interest me.”

Later, at a public Q&A following the screening of the two episodes of “Untold History,” he repeated, “I don’t consider myself a political activist, though I’ve become one in many ways.”

Then he drew connections between the two episodes — one in which Harry Truman said he knew he was doing the right thing when he dropped the atomic bomb on Japan, and other in which George W. Bush spoke of good vs. evil.

“America is possessed with a religious conviction,” he said. ” … We think we’re special, but we’re not.

“There seem to be madmen running the country. Mad men. They wear suits, they wear ties, they talk nice like Obama or tough like Bush, but what’s the difference? They’re mad men.”