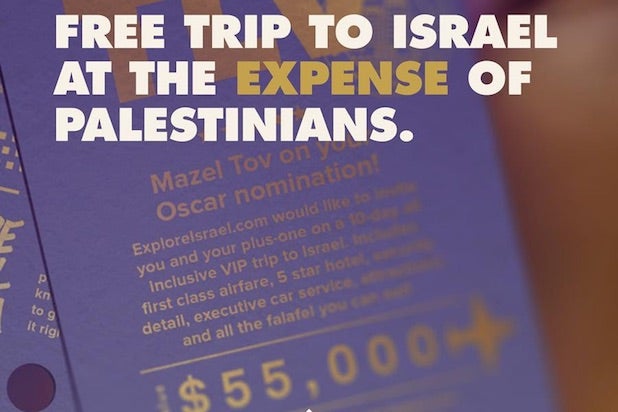 A pro-Palestinian group is urging Oscar nominees not to accept a free trip to Israel included in an unofficial Academy Awards gift bag.

Sponsored by the Israeli government, the 10-day luxury trip is valued at $55,000. It is part of a gift bag created by the Los Angeles marketing company Distinctive Assets that is offered to all acting and directing nominees who do not win the Oscar. The bag has no official tie to the awards ceremony.

Shortly after the contents of the gift bag were revealed, a campaign using the hashtag #SkipTheTrip began encouraging nominees not to accept the free vacation.

The campaign is part of the BDS movement, for Boycott, Divestment and Sanctions. The movement supports Palestinians who have called for measures against Israel until the country ends its occupation of Arab territories seized in 1967, and “recognizes the fundamental rights of the Arab-Palestinian citizens of Israel to full equality,” among other steps.

As part of the appeal to nominees, the group Jewish Voice for Peace (JVP) attempted to take out a full-page ad in Variety asking gift bag recipients to forgo what it called a “free trip to Israel at the expense of Palestinians.”

But according to the JVP, the trade publication turned down the ad because “the topic is too sensitive at this time.”

The JVP press release quoted Director of Strategic Partnerships Patrice Atiee, who did not immediately respond to TheWrap’s request for comment.

In the release, JVP executive director Rebecca Vilkomerson pointed to a separate Variety ad that blasted the Obama administration for policies hostile to Israel. “This is a clear and disturbing example of the constraints on public debate about Palestine and Israel,” Vilkomerson said.

“Variety’s refusal to print our ad — especially in the context of the pro-occupation ads they have published in the past — illustrates a clear bias. Messages that support Israel are acceptable, while those that assert the humanity of Palestinians are censored.”

Last week, the Academy sued Distinctive Assets over the bag, charging that the company misled people into thinking that its gift bag was an official Academy offering.

In fact, AMPAS discontinued its own gift bags a decade ago, after paying back taxes on the lavish bags for a number of previous recipients.