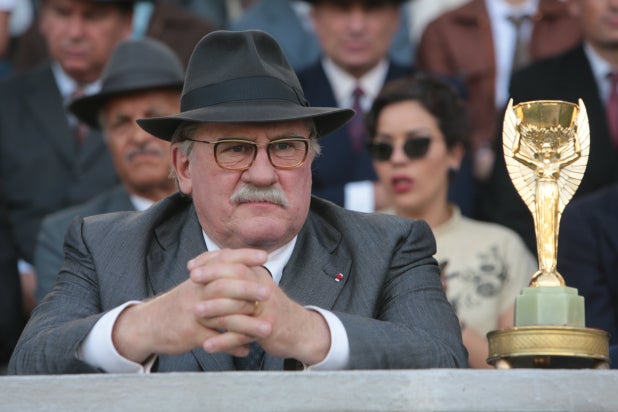 If North Korea’s Kim Jong-un had rewritten “The Interview” as a paean to his brilliant, saintly reign, it could not possibly be funnier than “United Passions,” the mostly FIFA-funded $29 million historical drama about the soccer group.

Since FIFA stands accused of over $150 million in bribes and reportedly has $1.5 billion in the bank, “United Passions” must have seemed like a good deal. Bothered by pesky journalists and prosecutors who indicted 14 FIFA folks? Pay for a nicer story! It probably cost a couple of years’ worth of FIFA ex-president Sepp Blatter’s salary.

Tim Roth plays the now-disgraced Blatter. Gerard Depardieu and Sam Neill as Blatter’s passionate predecessors are  pretty good in the picture, oddly enough, and each deserves a special Oscar for Laughing All the Way to the Bank. “United Passions” is one of those rare films so unfathomably ghastly you could write a better one while sitting through its interminable 110 minutes. I’d rather re-watch Elton John‘s “Gnomeo & Juliet” 110 times.

Director Frédéric Auburtin (“Paris je t’aime”) can get talented actors to do their thing, but he fails to stage a single engaging scene or to link one scene to another in anything like a comprehensible plot. The bad guys–racist Britons, mean journalists, anyone in FIFA’s way–are remarkably weak opponents, and it’s seldom clear precisely what they’re after. Auburtin and cowriter Jean-Paul Delfino manage to be stupefyingly obvious yet murkily tough to follow. It’s fun to watch Roth come up with clever ways to deliver lines like, “Unemployment has all but disappeared because everyone is working.”

You’d think there would be lots of kinetic soccer footage, but most of the action involves white guys in suits sitting down, occasionally getting up to walk or to hop a jet soccer fans ultimately paid for. One historic soccer match is dramatized by showing FIFA guys and fans sitting in the stands, intercut with fans listening to the game on radio and a few shots of actual soccer playing. Here is the entire dialogue for the montage, the announcer for the game attempting to explain the action:

The English referee blows his whistle to start the game. Brazil immediately has the upper hand. Chico passes to Friaca. Friaca centers for Ademir. Ademir keeps control of the ball. He shoots. He hits the post! The match continues. Still nil-nil.
The atmosphere is suffocating. Friaca recovers the ball. Stares at the goalie. A cannonball! Goal! Goal for Brazil! Our beloved Brazil scored the first goal in this World Cup final. Brazil! Friaca scored a spectacular goal! Brazil will be the champions! The joy of Brazil’s victory is on everyone’s faces. But Brazil must beware of Uruguay’s counterattacks. Ghiggia faces Bigode, shakes off the defender, centers to Schiaffino. A goal for Uruguay. They’re level. But it’s not over yet. Brazil 1, Uruguay 1. Tension is high, with 13 minutes to go. The score is one all. But Brazil should still be the champions. President Rimet [Depardieu] is leaving the VIP area to present the trophy to the winning team’s captain. Who will no doubt be our great Augusto! My friends, from now on, nothing will ever be the same in Brazil. Our team’s white shirt has lost its purity. We haven’t just lost a match today. We’ve lost our dream. I should say we’ve lost our honor.

Um, who won? Why? What was the significance of the victory? Besides being a candidate for the least rousing sports scene ever filmed, it makes less sense than “Mission: Impossible 2.”

A few things emerge clearly. Blatter gets hired because he is, as one FIFA guys puts it, “apparently good at finding money.” Rather. Roth’s Blatter hates stadium riots, racism, and sexism–even though the real Blatter once said women’s soccer should feature more revealing uniforms–but what really riles him is corruption in soccer.

“The next tournament will take place in both South Korea and Japan,” says Blatter to a bunch of less saintly FIFA guys, adding helpfully, “Far from Europe. Some of you may feel that this is a good opportunity to close lucrative deals with certain lobbyists. Think again. This sport is spotless. There is simply a lot more money involved…which is why from now on we will be exemplary in all respects. The slightest breach of ethics will be severely punished. “

“Is that a threat, Mr. President?” says an anonymous-looking FIFA guy.

“I’m not accusing anyone,” says the slippery Blatter. “Our federation has almost 200 members. Is there anyone in this room naïve enough to believe that they’re all honest? There are always a few rotten apples…I am warning you, all of you. We will play by my rules now.”

Blatter doesn’t exactly tell us what his rules are, or who’s violating them, or how. We don’t really get what his game is, or what soccer is, or why anyone watches it. Somehow, with relief, we wind up at the finale, when Blatter wins a triumphant re-election. The movie’s last sentence is the narrator saying, “Who would have believed this?”